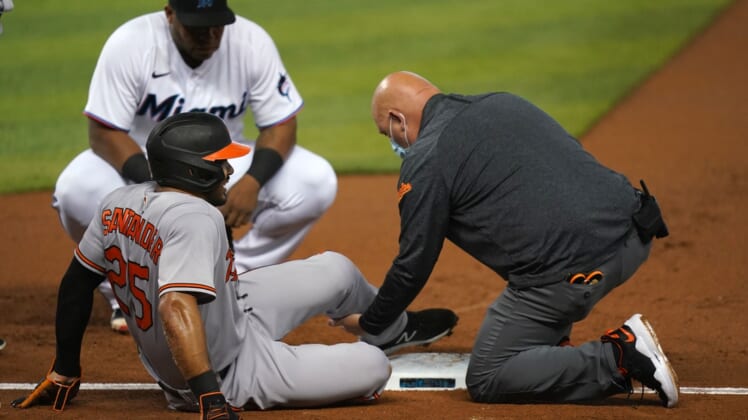 Apr 20, 2021; Miami, Florida, USA; Baltimore Orioles right fielder Anthony Santander (25) sits on the field while being attended to by a team trainer after an apparent injury in the 1st against the Miami Marlins at loanDepot park. Mandatory Credit: Jasen Vinlove-USA TODAY Sports

Santander will miss approximately two to four weeks, manager Brandon Hyde said prior to the team’s 3-0 loss to the Miami Marlins.

The 26-year-old Santander was injured Tuesday while returning to first base on a pickoff throw. He fell to the ground in pain and had to be helped off the field.

X-rays displayed there was no fracture but an MRI exam revealed the sprain.

Hyde said the diagnosis was encouraging to him.

“Very positive news,” Hyde said. “Really pleased with the results we got this morning, because when I went out there I was expecting the worst.”

The switch-hitting Santander is batting .196 with two homers and eight RBIs in 16 games this season.

Outfielder Ryan McKenna, 24, was recalled from the alternate training site and went hitless in two at-bats on Wednesday. McKenna’s average dropped to .167 in 12 appearances this season.