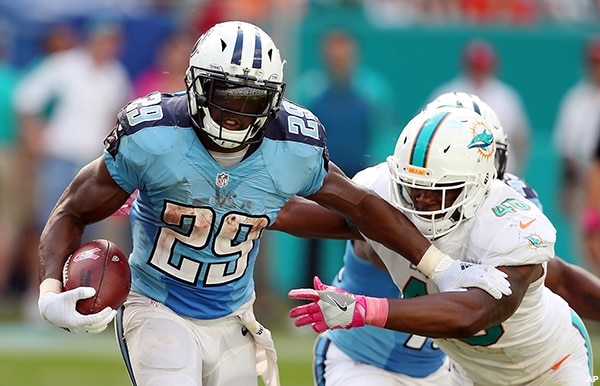 Led by a progressing and talented young quarterback, the Tennessee Titans could be 2017’s version of your very own Oakland Raiders.

Each NFL season there’s always one team poised to break out and be the big surprise hit no one saw coming. Last year, it was the Raiders turn to make the big leap from struggling team to championship contender

In the case of the much-improved Tennessee Titans, they might be the team this year who makes another significant jump.

Titans QB Mariota continues to progress into a top-tier passer.

The Raiders first opponent rattled off nine wins in 2016 in what was truly a breakout year for the young club. Led by quarterback Macrus Mariota, the Titans went from also-ran to contender very quickly. In going 9-7 last year, the team surprised the NFL’s best prognosticators and it narrowly missed the playoffs after losing Mariota to the same broken leg injury that sidelined Derek Carr – the injuries happening on the same day.

So how do the Titans stack up on both sides of the ball? Quite nicely which should create some problems for Oakland on Sunday.

An Offense With More Weapons

Mariota is coming of a very good year which saw the third year start out of Oregon make great strides to being a consistent signal caller in the league. Mariota doesn’t do too much to give a game away and threw 26 touchdowns in 2016 while only being picked off 9 times. He threw for almost 3,500 yards last year and completed over 61-percent of his passes. This despite not having any real number one receiver. In fact, Mariota’s numbers could have been much more impressive had he been able to count on a go-to wide out.

The Titans addressed this weakness on their offense during the offseason drafting first-rounder wide receiver Corey Davis from Western Michigan. Davis, who amassed 5,000 yards receiving and 52 touchdowns over the course of his college career, is expected to make the jump the NFL effortlessly and contribute greatly right from the get go. The addition of former New York Jets route runner Eric Decker means Mariota has more viable, and talented, targets.

The revival of running back, and Las Vegas and Bishop Gorman HS product, DeMarco Murray was also a boost for the Titans, as was rookie Derrick Henry. Murray led the NFL in carries and had almost 500 touches on offense. To say he shouldered the load is an understatement. The improvement in the running game surely helped Mariota open the Tennessee Titans offense a little more and they look to be very potent this season.

This success, of course, is due to the Tennessee Titans offensive line who ranked only behind Dallas last year as one the best in the lines in the league. With Jack Conklin, Taylor Lewan, and Ben Jones at center, this crew is tough to beat up. They have done a nice job of protecting Mariota (despite his leg injury) and also effectively open holes for the Titans running game. They’re going to give the Raiders young and inexperienced interior players a tough time.

Even for Raider Nation, who despises anything to do with the Pittsburgh Steelers, it’s hard to deny the defensive brilliance of Dick LeBeau. The crafty veteran coach has taken a depleted Tennessee Titans defense and built it into one of the leagues best up-and-coming squads. Like the Raiders in 2016, one of the team’s weaknesses was at the cornerback and safety position. The Titans yielded too many yards in the air – even to also-ran Blake Bortles of Jacksonville.

The defense ranked a respectable 17th – despite the glaring weaknesses in the backfield. The Titans spent time and money upgrading the position but if a few of those players don’t pan out, expect them to tread water or lose ground defensively in 2017.

The matchup will certainly be a challenge for the Raiders as they head into Nashville. The Titans offense were surely test the Raiders up front, and in the air all day. Mariota is the read deal and his progression looks to take another big step this season.

Look for the Raiders defense to capitalize on the improved, but yet to gel, Titans defense. Even with an upgrade in personnel, Carr and the Raiders offense should have a good day in the air and on the ground.