One Thing Every NFL Team Should Be Thankful For

Everyone is thankful for something during the holiday season. Whether it’s hanging out with friends and family or that much-needed vacation, we all look forward to this time of the year.

The same can be said for about half the teams in the NFL, who are preparing for a late-season playoff push. But what about the teams that are just playing out the string? What are they thankful for?

Here’s a look at one thing every NFL team should be thankful for heading into the holiday season.

No team has hosted a Super Bowl. At 9-2 on the season and clear favorites in the NFC, this is a likelihood for the surprising Cardinals. Then again, the New Year’s holiday may very well bring a divisional playoff loss, ruining Festivus for everyone involved.

Need I say more? In any other division, the Falcons would be looking forward to the 2015 season. Now at 0-7 outside the division, Atlanta still has a shot at the playoffs. Lost in all this wonderful Thanksgiving cheer is that Mike Smith is probably preparing another late-game meltdown at some point soon.

Has anyone ever in the history of ever thanked TMZ for anything? Well, the Ravens could very well be this close to doing just that. Imagine if the Ray Rice scandal unfolded in-season. Ouch, that would’ve been pretty bad. 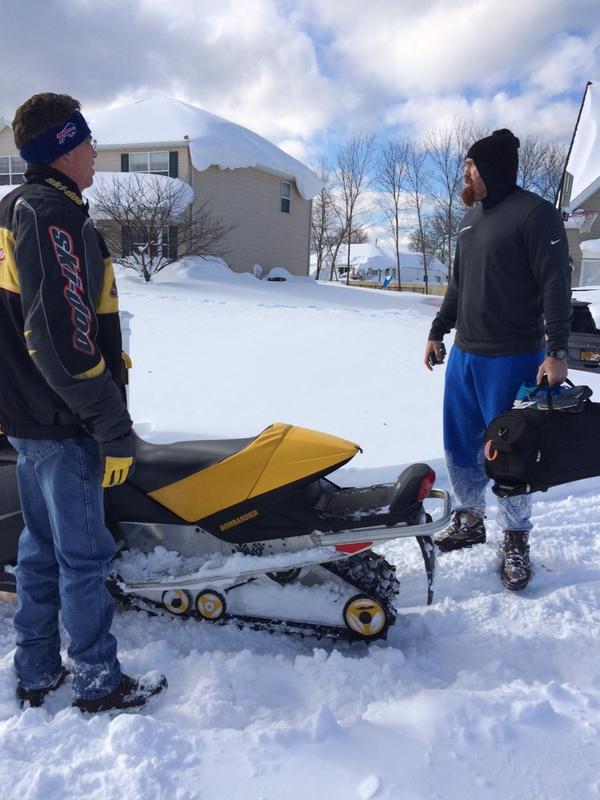 How else would they have gotten to Detroit and beaten the New York Jets? Kyle Orton wasn’t carrying them on his back, he’s too busy protecting his Jack Daniels.

The Panthers actually have a quarterback willing to play behind THAT offensive line. The fans, players, ownership group and front office personnel should be VERY thankful of this. Now let’s see if Cam bolts the first opportunity he gets.

The number 35. That’s the total percentage of Chicago’s offensive yards that Forte has gained thus far this season. Jay Cutler better buy this dude something real nice for Christmas. Maybe a promissory note that guarantees better play under center.

Now that the Bengals have Hue Jackson as their offensive coordinator, their offense is much more balanced than we have seen in the past. Secretly, we have to believe that Marvin Lewis and Co. were happy Gruden took the Washington job. On the other hand, Redskins fans… 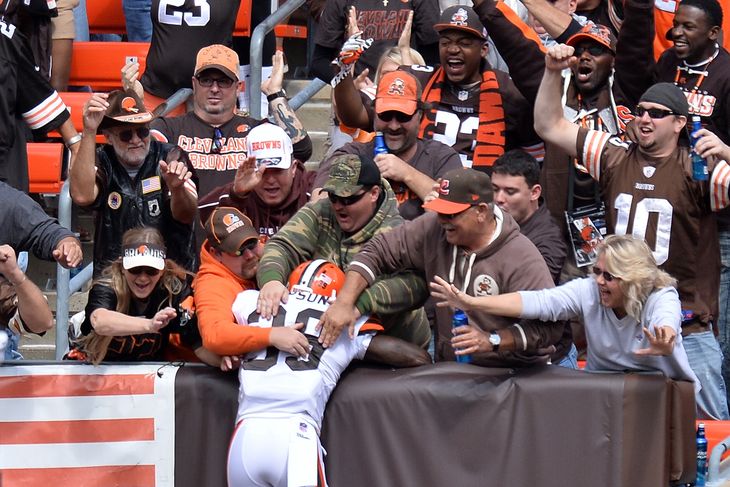 Courtesy of ESPN.com: Is this real life? Browns are in the playoff picture heading into December.

Now at 7-4 on the season, Cleveland is firmly in the mix for a playoff spot and the AFC North title. As the surprise Browns now turn their attention to the stretch run, let’s hope Johnny Manziel decides to drink alcohol-free egg nog during the holiday season. No more entourage incidents. You hear me, Mr. Manziel?

Cowboys fans are now incredibly thankful for Romo, especially after getting a glimpse of what life would be like with Brandon Weeden under center. It honestly took THAT to happen for fans in the Big D to realize just how good they have it?

John Elway and John Fox. Two professional men that have built a championship team from the ashes of Kyle Orton and Tim Tebow. While fans in Denver might be busy roasting some green stuff this holiday season, they should also pay homage to the John’s.

Unfortunately, Schwartz (now the Bills offensive coordinator) reared his ugly head back in Motor City on Monday when his team had to escape a horrible snow storm in Western New York. Speaking of Schwartz and escaping, let’s all hope the Lions escape from the dark cloud that he brought on the organization over the past few years. At 7-4, they may be on the verge of doing just that. 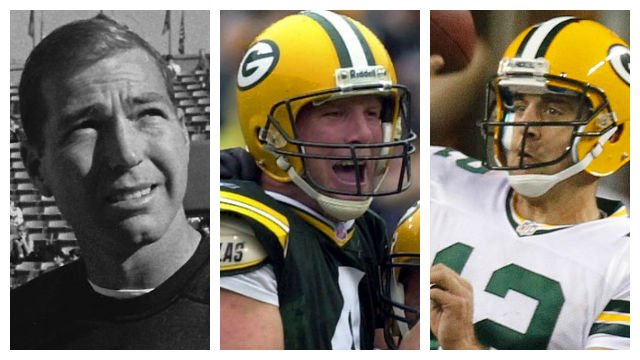 Courtesy of Packers.com: It doesn’t get much better than this.

No, not Matt Flynn and Scott Tolzien. No, not Seneca Wallace and Doug Pederson. Instead, the Packers have to be jumping for joy with the presence of Aaron Rodgers in Green Bay…a quarterback that followed Brett Favre to championship-caliber play. Meanwhile, the Jets are choosing between Michael Vick and Geno Smith. Life just isn’t fair sometimes.

Painter went 0-8 as the Colts starter in 2011, leading the way for the team to select Andrew Luck No. 1 overall in the 2012 NFL draft. That’s a lot for fans in Indianapolis to be thankful for.

Some hope. Some hope at last. While Bortles has struggled with mistakes as a rookie, he’s proven that he has the talent to be the Jaguars franchise quarterback. And for a team that hasn’t had much hope at this position in recent seasons, this is some rather big news.

Fans in Kansas City will say that Smith can’t push the ball down the field or that he hasn’t thrown a touchdown to a receiver this season. That’s fine and dandy, but his 18 wins since the start of the 2013 season are just one less than the Chiefs had in the three seasons prior to his arrival. Remember Tyler Palko and Tyler Thigpen?

That scandal seemed to unite a locker room and helped the Dolphins build a much better offensive line in front of Ryan Tannehill. Oh, and it finally rid the franchise of one Jeff Ireland. For that, Miami should be thanking Incognito and Martin.

Due to Goodell’s overreaching power around the NFL, Peterson will no longer be a distraction for the remainder of the 2014 season and potentially moving forward into 2015. And while losing Peterson is a big deal on the field, the franchise can now move on to a new era with Teddy Bridgewater under center. 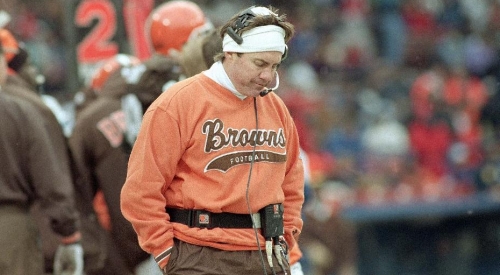 Courtesy of ESPN.com: Keep your head up Bill, it will get better.

Cleveland fired Bill Belichick following a five-win 1995 season. Since then, the future Hall of Fame head coach has led the Patriots to five Super Bowl appearances, three championships and a .732 regular season winning percentage. There you guy fans in New England, one reason to pay homage to Cleveland.

New Orleans fell to 4-7 following a loss to the Baltimore Ravens on Monday night. But by virtue of playing in a horrendous NFC South, Drew Brees and Co. are tied for first. To put this into perspective, the Saints would be in last place in three of the other seven divisions in football.

It it wasn’t for the Jets being a complete dumpster fire this season, the Giants would consistently make front-page headlines in the New York newspapers. And while they still see that front page from time to time, their 3-8 season is going largely unnoticed in The Big Apple.

If there is any coach in the NFL that could make a season interesting for a two-win team, it’s Rex Ryan. He’s a happy-go-lucky individual in a city that needs some positivity coming from its football teams. Unfortunately for Jets fans, this is likely Ryan’s last season as the team’s head coach.

Derek Carr and Khalil Mack. Two bright spots in what could be a historically bad season for the one-win Raiders. Void of much hope in the final five games of the year, at least the Raiders have something to look forward to down the road.

It isn’t a coincidence that Philadelphia’s success on draft day starting taking a turn for the better when the franchise hired Gamble to be its vice president of player personnel back in February of 2013. Now over the past two drafts, the Eagles have built a solid young core.

We know one thing here. Ben Roethlisberger has to be thankful of his young receivers. The likes of Markus Wheaton and Martavis Bryant have provided the quarterback with solid receiving options behind Antonio Brown. Through 11 games, the two have combined for 52 receptions, 763 yards and eight touchdowns. Not too shabby.

No matter what is happening on the field in San Diego, the players and coaches have this to look forward to.

I am sure Buffalo Bills players would give up their entire holiday season to have that scene for just one day this winter.

49ers fans went from braving the cold and windy afternoons at Candlestick to having to take cover from 90 degree weather in Santa Clara. It’s now time that these fans put away their wine and cheese and actually make Levi’s a home-field advantage for their team.

Despite struggles this season, the Seahawks can point to the Lombardi Trophy they hoisted last February. And while that defending champion title might only last a few more months, it will still be there during the holiday season. Oh, and they still have Money Lynch for at least five more games.

Let’s just assume the Rams are going to be moving to Southern California next year. That’s pretty much the only thing this last-place team has going for it right now in terms of hope.

The 2-9 Buccaneers are as close to first place as the San Francisco 49ers and Seattle Seahawks. While no one expects this team to win the horrible NFC South, the simple fact that it’s still in the race heading into December is utterly ridiculous.

If you haven’t eaten good old Nashville food, you just haven’t lived life. The Titans may be playing in Houston this upcoming weekend, but at least they have this spread to look forward to on Thanksgiving. On the field? Nah, not much of anything to look at here.

Washington Redskins: Do we Even Have to?