One is enough: Eagles eager to erase losing feeling in Indy 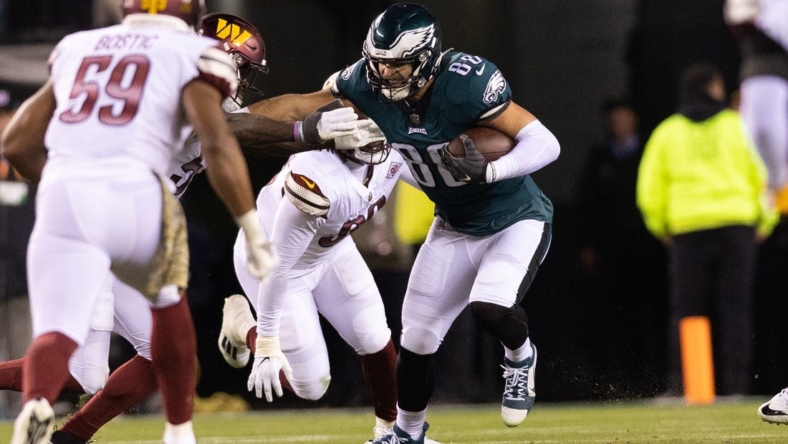 There is no time for reflection as the Philadelphia Eagles hit the road following the team’s first loss of the season Monday night.

Now with the New York Giants and Dallas Cowboys nipping at their heels in the NFC East, the Eagles will pay a visit to the Indianapolis Colts on Sunday afternoon.

Philadelphia (8-1) is gearing up to recover quickly from Monday’s stunning 32-21 home loss to the Washington Commanders when they travel to play the Colts (4-5-1).

The Eagles lead the Giants by one game and the Cowboys by two and will play New York twice and Dallas once over the season’s final five weeks.

The Colts are a more pressing concern.

Indianapolis is coming off a 25-20 victory at Las Vegas in interim coach Jeff Saturday’s debut, with on-again/off-again starter Matt Ryan throwing the game-winning TD with 5:07 left.

Jonathan Taylor ran for 147 yards (with a 66-yard touchdown) against the Raiders and will be facing a Philadelphia defense that has allowed 464 yards on the ground over the last three games.

“They are going to run until we stop it,” Eagles defensive end Brandon Graham said after Monday’s defeat. “We’ve got to fix our issues.”

Making his debut as the Colts’ offensive play-caller, Parks Frazier saw his team score more than 20 points for just the second time all season.

“You don’t know when you get in the moment how you’re going to respond,” Frazier said. “For me, just being in the moment and everything just felt natural to me. I think that gave me a lot of confidence moving forward.”

Frazier has some familiarity with the Philadelphia playbook, having worked on the Indianapolis staff with Eagles head coach Nick Sirianni and defensive coordinator Jonathan Gannon.

“If they’re on the field a lot, they’re going to score a lot of points.”

The teams are polar opposites entering Week 11 when it comes to turnovers.

The Eagles still lead the NFL with a plus-13 turnover differential despite four giveaways on Monday night — one more than they had in their first eight games combined. Safety C.J. Gardner-Johnson leads the NFL with six interceptions, all in his last five games.

The Colts rank 31st with nine more turnovers than takeaways, and Ryan is tied for second in the league with nine interceptions. In nine career games against Philadelphia, Ryan has a 4-5 record with 17 touchdown passes and 12 picks.

Eagles tight end Dallas Goedert is out after sustaining a shoulder injury Monday.

“It’s not going to be easy to replace Dallas, and it’s not just one guy that’s going to do it. That stinks for us as a team, stinks for Dallas,” Sirianni said.