On brink of first title, Aces visit Sun for Game 3 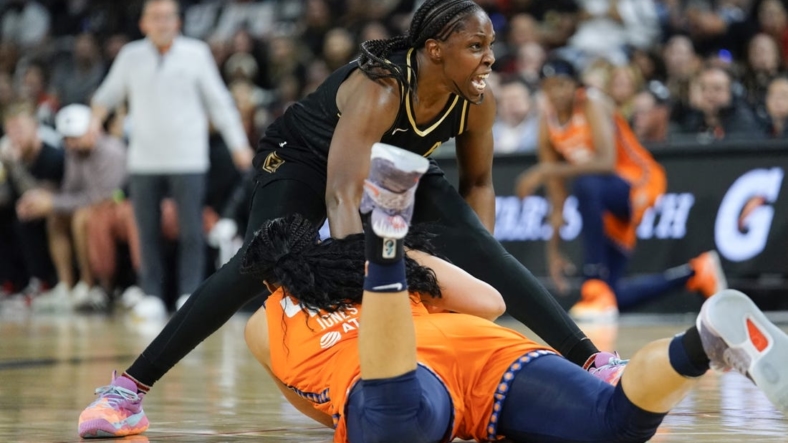 The Las Vegas Aces have never won a WNBA championship. Clinching the title in a road game is fine with them.

That could happen Thursday night as the Aces look to sweep the best-of-five WNBA Finals against the Connecticut Sun with a victory in Game 3 in Uncasville, Conn.

“It’s going to take every bit of everybody,” Aces guard Chelsea Gray said. “We’ve been a good road team this year so we might as well go ahead and try to win on the road.”

The Sun are in a must-win situation following an 85-71 loss in Game 2 in Las Vegas on Tuesday night.

“You can’t think big picture,” Connecticut coach Curt Miller said. “That becomes overwhelming and daunting and feels, at times, too big. All we talk about is Game 3. And in particular, all we’re going to talk about is the first quarter. That’s our approach. I think if you start thinking, ‘We have to win three in a row’ that becomes (too) big.”

While Game 1 might have been dictated more by defense, the Las Vegas offense had it going in the second contest of the series. Aces forward A’ja Wilson made 10 of 13 shots from the field in a 26-point performance in Game 2.

“I’m getting to my spots,” Wilson said. “My teammates are putting me in a situation where I’m comfortable.”

Miller has been using a bigger lineup to force the Aces into different combinations. It has worked only to a degree.

“There were stretches where our big-big lineup did some good things, changed some of the matchups,” Miller said.

Inconsistent play in the backcourt has been an issue for the Sun, who have yet to make the necessary adjustments. Gray and Kelsey Plum have set the tone for the Aces on a regular basis.

“They just dominated that area (in the paint) and it was mostly off the bounce,” Miller said of the Aces getting the ball inside.

Plum has been shaky at times this postseason. So if she’s getting into a groove, that’s going to give another boost to the Aces.

“I’m just glad that they’ve been carrying it and I decided to join the party,” Plum said after scoring 20 points Tuesday.

Despite much of the emphasis on guard play, the Aces know where they need to get the ball.

“The more points in the paint we can get works in our favor,” Wilson said.

There aren’t easy answers for Connecticut.

Gray has contributed 21 points in each game so far for Las Vegas.

Wilson said keeping composure early in Game 3 on the road will be important for Las Vegas.

“They’re not going anywhere,” Wilson said of the Sun. “We’re expecting them not to go anywhere. … We’re not done yet. We still have things we have to take care of.”