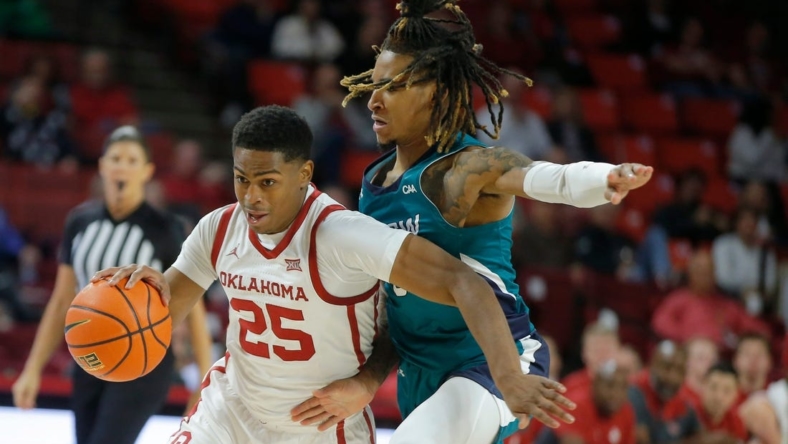 Grant Sherfield and Joe Bamisile scored 15 points each to lead Oklahoma to a 74-53 win over UNC-Wilmington on Tuesday in Norman, Okla.

Bamisile hadn’t made much of an offensive impact in his first two games after transferring from George Washington in the offseason. In the Sooners’ first two contests, he’d totaled just nine points and gone 1-for-6 from behind the 3-point line without an assist.

But Bamisile played a major role off the bench early as Oklahoma jumped out to a 28-12 lead just over 11 minutes into the game. Bamisile scored nine of the Sooners’ 11 points during a quick burst in a two-minute span during that initial run.

Oklahoma (2-1) never trailed, and the Seahawks never got closer than eight points after an initial barrage in the first three minutes of the game where the Sooners made their first four shots — all 3-pointers.

Oklahoma started hot early, going 9-for-12 from the floor, including 5-for-6 from long distance, after firing just 8 of 33 on 3-pointers in their first two games.

While Oklahoma was having success from the perimeter, UNC-Wilmington (1-2) struggled mightily. The Seahawks didn’t hit a 3-pointer until nearly midway through the second half, missing their first 14 shots from beyond the arc.

The Sooners had 19 assists, with six by Sherfield, and won the rebounding battle, 37-28.

Trazarien White led the Seahawks with 19 points but was just 7 of 17 from the floor. No other UNC-Wilmington player had more than eight points.

Oklahoma’s lead climbed to as much as 19 in the first half, and the Seahawks didn’t get closer than 14 after the break.