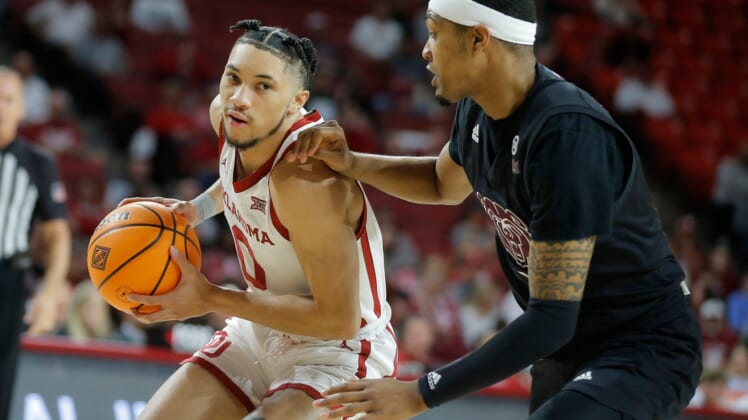 Umoja Gibson scored 28 points to lead Oklahoma to an 89-72 win over Missouri State in the first round of the NIT on Tuesday in Norman, Okla.

Jordan Goldwire added 15 points, eight assists and three blocks, going 7 of 11 from the field for Oklahoma, which has won five of its last six games. Goldwire scored 13 of his points in the first half.

The Sooners (19-15) will play either Colorado or St. Bonaventure in the second round. The Bears’ season ends 23-11.

After narrowly missing the NCAA Tournament, Oklahoma didn’t let disappointment affect its play, scoring its most points since the second game of the season.

Oklahoma poured in 17 points in the final 3:21 of the first half, with Gibson scoring 11 points to stretch what was a tie into a six-point lead at halftime.

Gibson hit two of his five 3-pointers during that stretch, as the Sooners were 7 of 11 from beyond the arc in the first half.

Isiaih Mosley helped keep Missouri State in the game early, scoring 22 points in the first half, nine during that final stretch as he and Gibson went back and forth. Mosley was 9 of 12 from the floor in the first half, hitting three 3-pointers.

But after halftime, Gibson continued his hot hand while the Sooners locked down on Mosley.

Gibson scored eight points in the first six minutes of the second half as Oklahoma reeled off a 15-7 run to take control.

The Sooners led by at least 12 the rest of the way.

Mosley missed his first four shots of the second half. He finished with 28 points to lead Missouri State while Gaige Prim added 14.

After a slow start from the field, the Sooners were 32 of 58 before missing seven of their last eight shots.

But Missouri State couldn’t get any closer than 14 during the last six minutes as the Bears were just 2 of 10 from the field late.