Oilers, Kings meet with second place on the line 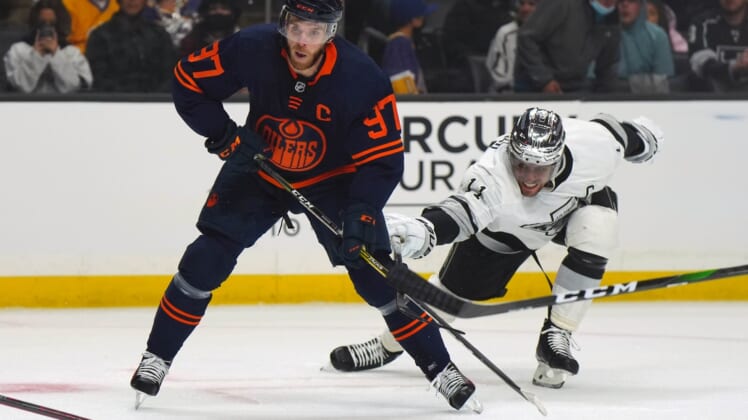 In a possible playoff preview, the Los Angeles Kings will visit the Edmonton Oilers on Wednesday, with both teams coming off opposite ends of blowout results.

The Kings hold a two-point edge over the Oilers for second place in the Pacific Division. While there is still time for either club to catch the division-leading Calgary Flames, Los Angeles and Edmonton might be better served by solidifying their postseason spots in order to avoid the crowded Western Conference wild-card race.

The path to the playoffs is marked not only by defeating fellow contenders, but by taking care of business against lesser competition. The Oilers achieved that goal with a 6-1 rout over the Arizona Coyotes on Monday, yet the Kings are looking to rebound from one of their worst defeats of the season.

Facing the last-place Seattle Kraken at Los Angeles on Monday, the Kings absorbed a 6-1 defeat. Seattle’s Alex Wennberg scored just 14 seconds into the game, an early omen of the rough night ahead for the Kings.

“It’s hard to pinpoint just one thing (that went wrong),” Los Angeles captain Anze Kopitar said. “It was a lot of stuff that, obviously, didn’t go right and we didn’t do right. So this one definitely stings, especially the time and position we’re in. It’s a hard one to swallow.”

Los Angeles had just defeated the Kraken at home 4-2 on Saturday in a result indicative of the Kings’ recent inconsistency. The Kings are 4-4-1 in their past nine games, evenly alternating between wins and losses.

By that pattern, L.A. is due for a victory on Wednesday, although Edmonton has become a tough destination for visitors. The Oilers have won seven consecutive games on home ice.

Monday’s win over Arizona provided the Oilers with a positive turnaround from a 9-5 loss to the Flames on Saturday. Goaltender Mikko Koskinen gave up five goals on 12 Calgary shots in the defeat, before getting pulled from the game in the second period. He came back to stop 31 of 32 Coyotes shots on Monday.

“It was really important that we learned a lesson from the last game. We really wanted to bounce back,” Koskinen said. “It was an embarrassing game Saturday, and I think we got exactly the result that we needed. Not just the result, but the way we played.”

Koskinen might not be in net Wednesday, however, as Edmonton has been mostly splitting starts between Koskinen and Mike Smith over the past several weeks. Smith also had a tough time against the Flames, giving up four goals in less than two periods.

Los Angeles goaltender Calvin Petersen allowed six goals on 38 shots against the Kraken, so Los Angeles might opt to start Jonathan Quick against the Oilers. Since the Kings also play Thursday in Calgary, Quick and Petersen are likely to split the back-to-back starts in some order.

As always, the Oilers continued to be powered by their two superstars. Connor McDavid has 19 points (seven goals, 12 assists) over the course of a 10-game points streak, while Leon Draisaitl has 17 points (10 goals, seven assists) during a nine-game points streak.

This is the third of four regular-season meetings between the two clubs. The Kings earned a 5-1 victory at Edmonton on Dec. 5, and the Oilers got a 5-2 victory at Los Angeles on Feb. 15.