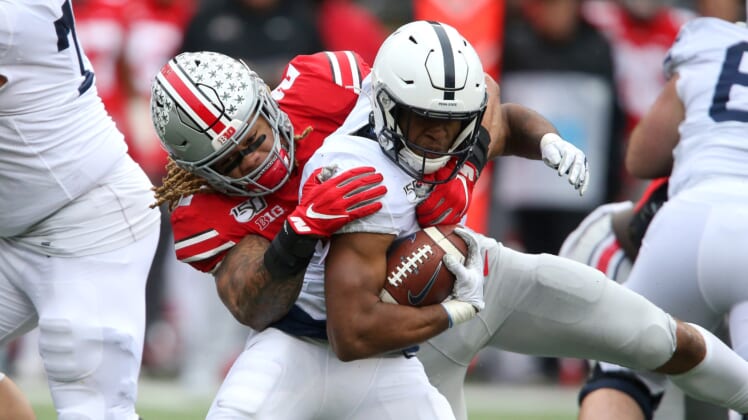 The Ohio State Buckeyes (No. 2) remained undefeated on Saturday, beating longtime rival Penn State (No.8) by the score of 28-17.

Ohio State got off to a hot start on both sides of the ball and took a 14-0 halftime lead. The Nittany Lions made a strong charge in the second half to pull to within four points, but then the Buckeyes kicked it into high gear and dominated down the stretch.

These are the biggest winners and losers from Saturday’s huge clash between Penn State and Ohio State.

The balance and talent the Buckeyes feature on both sides of the ball have them looking like a legitimate title contender.

Offensively, Ohio State is a juggernaut that can beat you through the air and on the ground. Justin Fields has proven to be the perfect centerpiece for Jason Day’s attack. Blessed with brilliant athleticism and an underrated arm, he leads one of the most lethal offenses in the nation. An offense that had its way against Penn State to the tune of 417 all-purpose yards on Saturday.

The Buckeyes are just as impressive on defense. Led by future top-three pick next April in the NFL Draft, Chase Young (more on him later), this group of talented defenders is equipped to take on any challenge. That was crystal clear Saturday as the Buckeyes held the high-powered Penn State offense to 227 total yards.

Assuming the Ohio State marching band is clairvoyant about next weekend’s regular-season finale against Michigan, the Buckeyes should be considered favorites to win the College Football Playoff in January.

The Buckeyes wasted no time laying waste to this defensive front, going 91 yards on 12 running attempts to open the game with a touchdown-scoring drive. As the game wore on, Ohio State’s rushing offense continued to be a problem Penn State was not equipped to handle.

Star running back J.K. Dobbins piled up 157 yards and two touchdowns on 36 carries. Justin Fields ran for 68 yards. It was bully ball in its classic form, and Penn State’s defense was overwhelmed.

Early on, it was apparent that the two-game suspension wouldn’t be a factor as rust was in no way evident. The Heisman candidate made back-to-back tackles for a loss in the first quarter, tying the school record for most sacks in a single season.

It was therefore no surprise that Young quickly blew past Vernon Gholston and set the new record in Saturday’s game against Penn State.

Young was in the backfield every single play. He is a game-wrecker of the first order and dominated Penn State’s offensive linemen. All told, Young finished with nine tackles, four tackles for a loss, three sacks and two forced fumbles.

Thanks in large part to the efforts of the man highlighted above, Penn State quarterbacks Sean Clifford and Will Levis had a miserable time of it Saturday in Columbus.

Clifford was unable to get anything going downfield due to the pressure he faced, and he exited the game after being hit hard by two Ohio State defenders.

The sophomore completed 10-of-17 passes but averaged just 4.2 yards per attempt. His replacement, Will Levis, threw a bad interception in the fourth quarter right after Ohio State had taken an 11-point lead.

Just a brutal day for Penn State quarterbacks. Though to be fair, every other quarterback that has faced the Buckeyes this year can commiserate with Clifford and Levis.

It started with a forced fumble on Justin Fields at the goal line in the first half, which Cam Brown recovered in end zone. Lamont Wade seemingly made all the big plays for Penn State on defense.

That was just the start.

Wade continued to make a huge impact for the Penn State defense, coming up with a second forced fumble in the second half. This one took place right after the Nittany Lions had roared back with two touchdowns to make it a one-score game in the third quarter.

Wade also forced a fumble late in the fourth quarter as he sacked Justin Fields, who limped off the field after tweaking his ankle on the play. As we detailed previously, Penn State’s defense struggled on Saturday. But thanks to the impact plays made by Wade, the Nittany Lions had a fighting chance in this game.