Any chance Tulsa could’ve had against the Buckeyes went out the window when Zaven Collins declared for the 2021 NFL Draft. Collins went to the Arizona Cardinals as the 16th overall pick, and left a massive void in the Golden Hurricane defense. That’ll make this one a little less challenging for Ohio State than it could’ve been.

Is The ‘Shoe the best stadium in college football? See our list of top 20 NCAA gridiron venues and where Ohio State’s home ranks

All our predictions are based on the Buckeyes starting these key players:

Redshirt freshman C.J. Stroud takes over at quarterback after winning a competition over Jack Miller and true frosh Kyle McCord. After Quinn Ewers decided to forgo his senior year of high school and come to Columbus a year early, though, things may get a complicated on the QB depth chart if Stroud doesn’t perform.

Nevertheless, Stroud had a stellar performance in the Spring Game, and can proficiently spread the ball around to a trio of excellent receivers in Olave, Wilson and Smith-Njigba.

Check out the buzz C.J. Stroud is getting in our 2021 Heisman Watch, as he rates among the top contenders

After trailing at halftime against the unranked Golden Gophers, Ohio State was able to pull away by outscoring Minnesota 35-17 in the final two quarters. Making his first career start, C.J. Stroud tallied four touchdowns on the ground. Meanwhile, Miyan Williams went for 125 yards on the ground. All-American Chris Olave scored two touchdowns while racking up 117 receiving yards.

Kayvon Thibodeaux is projected to be a high first-round pick in the 2022 NFL Draft, so after his injury suffered in Week 1, it seemed like the Buckeyes were a lock to win this. Oregon had other ideas. The Ducks absolutely stuck it to Ohio State, and even though C.J. Stroud threw for 484 yards, it wasn’t enough. It’s quite obvious the Bucks’ defense is going to be a serious issue if they don’t clean things up fast. 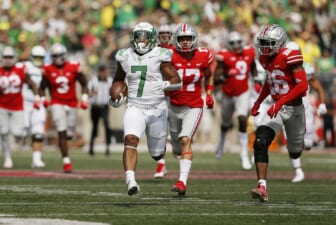 The Zips won once in the MAC last season. Their last defeat was to Buffalo by a score of 56-7, and they allowed 428 rushing yards. Imagine how much Master Teague III and the Buckeyes are going to run all over Akron in front of the home crowd.

After trailing Ohio State 35-3 at halftime last year, Rutgers made the score a little more respectable by the end at 49-27. Despite the change of venue to SHI Stadium and the reshuffled rosters on both sides of this Big Ten duel, don’t expect the scoreboard to change much. 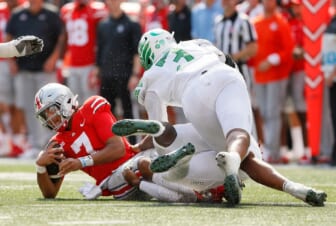 Maryland has too many disadvantages at key positions to match up well with a juggernaut like Ohio State in the Big Ten. However, Terrapins QB Taulia Tagovailoa may do enough to at least keep things interesting for a half before the Buckeyes pull away.

Indiana’s defense forced Justin Fields into three interceptions in the last meeting, and the Hoosiers will be out for vengeance after losing to the Buckeyes. In that 42-35 thriller, Indiana’s Michael Penix Jr. threw for 491 yards and five touchdowns. As long as Penix is right coming off a torn ACL, he gives the hosts an edge at the most important position, which should lead to an upset.

The Nittany Lions likely aren’t going to be a pushover. Remember, they only lost 38-25 to the Buckeyes in 2020, and started 0-5, but managed to rally for four straight wins to close the season. Coming back home will help Ohio State pull this one out, as the team shows resilience off a crushing defeat. 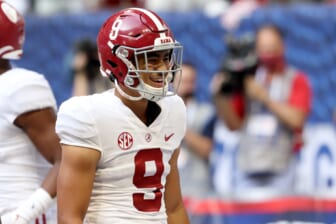 Nebraska has been frustratingly inconsistent since Scott Frost took charge in Lincoln in 2018. All the pressure is on the Cornhuskers to deliver, and chances are, going up against such a superior adversary in the Buckeyes will show the former powerhouse just how far away they still are from returning to glory.

Boilermakers defensive end George Karlafitis should provide some resistance to Ohio State’s offense, but he can’t do too much on his own. It’d take an extraordinary effort by Purdue just to keep this contest competitive in Columbus. Chances are, it’s another blowout win for the Scarlet and Gray.

As a freshman in 2020, Spartans receiver Ricky White had a serious coming-out party with eight catches for 196 yards against Michigan. Strangely, he did little else all season for Michigan State. That hints at the underlying problems that continue to plague this program in East Lansing, so the Buckeyes should have no troubles with Sparty at home.

Michigan just gave Jim Harbaugh a sort of backhanded contract extension, cutting his base salary in half before incentives. That’s in large part because the Wolverines can’t get it done in big games, and they haven’t beaten Ohio State since 2011. Until the talent gap is closed, expect the Buckeyes’ dominance to continue.