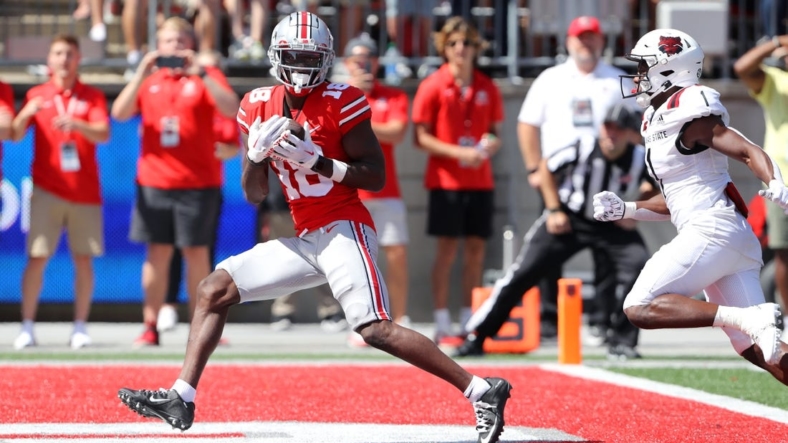 C.J. Stroud threw for 351 yards and four touchdowns, three to Marvin Harrison Jr., as No. 3 Ohio State shook off Arkansas State 45-12 in Columbus, Ohio, on Saturday.

On their next series, the Buckeyes went 59 yards on two plays, the last a 51-yard TD reception by Emeka Egbuka, who had a 44-yard catch on the previous possession.

Stroud was 16 for 24. Harrison made seven catches for 184 yards and Emeka Egbuka gained 118 yards on four catches, while Henderson (87 yards on 10 carries) ran for two scores.

Harrison, who tied a Rose Bowl record on Jan. 1 with three touchdowns catches, joined Joey Galloway as the only Buckeye players to have three TD catches in a game multiple times.

Arkansas State’s James Blackman was 20 of 34 for 188 yards with his favorite target being Champ Flemings with 10 catches for 105 yards. Flemings also added 20 rushing yards.

Ohio State was without standout receiver Jaxon Smith-Njigba, who sustained a leg injury in the season opener against Notre Dame, but Harrison made up for his loss with a pair of 42-yard TDs in the first half to shake off the Red Wolves, who were 44-point underdogs.

His first gave the Buckeyes a 7-0 lead, and he made a catch for 45 yards on the next series to set up an 8-yard scoring run by Henderson to make it 14-3.

Arkansas State responded with field goals of 38 and 34 yards by Zvada to make it 17-9. But the Buckeyes needed only three plays to go 75 to extend the lead to 24-9 on Harrison’s second score.