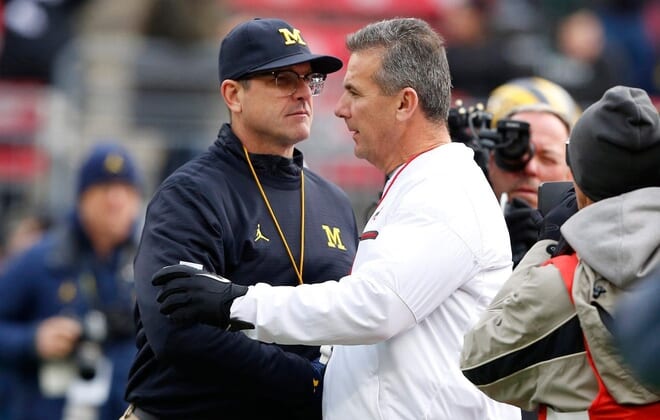 Head football coach Jim Harbaugh and the Michigan Wolverines are facing a ton of pressure heading into the 2020 college football season. The former Super Bowl head coach has posted a 47-18 record in five seasons with Michigan. Though, he remains without a win against the hated Ohio State Buckeyes.

Expectations are not necessarily too high in Ann Arbor heading into the season. The first coaches poll of the year has Michigan ranked 15th in the nation. It appears that bettors agree that it will be a down season for the Wolverines.

Oddsmakers have Michigan winning less than six games this season

According to Sports Betting Dime, the over/under for Wolverines wins this season stands at 5.5. Each Big Ten team will play 10 conference-only games this coming season due to the ongoing COVID-19 pandemic. This clearly means that Vegas is betting on a near .500 record for Michigan. There’s a good reason for this.

Without cupcake games outside of the Big Ten, Harbaugh and Co. face a daunting schedule this fall.

Two separate back-to-back games against ranked opponents. That’s not great for the Wolverines as they attempt to make a statement.

All of this comes amid a growing rift between Harbaugh and Ohio State head coach Ryan Day. During a conference call among Big Ten coaches earlier in the week, Michigan’s head man called out Day for cheating. In response, Day told his team that the Wolverines better hope for a mercy rule, because, Ohio State is going to drop 100 on Michigan.

As you already know, Harbaugh is winless against Ohio State during his five-year tenure with Michigan. The program has also lost four consecutive bowl games. If this doesn’t change in 2020, Harbaugh’s seat could get pretty hot.