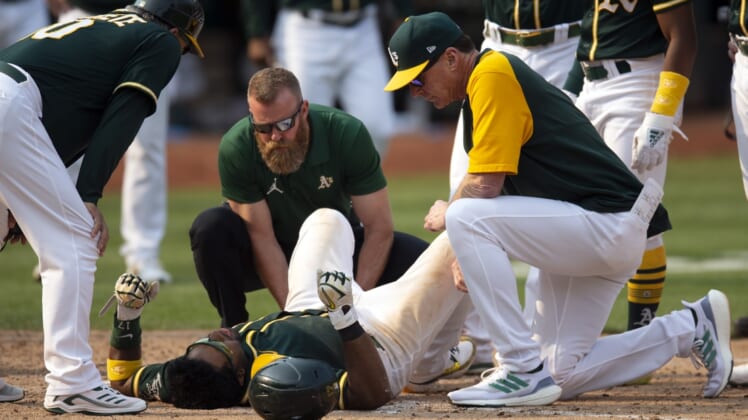 Sep 25, 2021; Oakland, California, USA; Oakland Athletics manager Bob Melvin (right) and a trainer (middle) examine Elvis Andrus after he fell to the ground with an injury while scoring the winning run against the Houston Astros during the ninth inning at RingCentral Coliseum. Mandatory Credit: D. Ross Cameron-USA TODAY Sports

The Oakland Athletics placed shortstop Elvis Andrus on the 10-day Injured List on Sunday with a broken left fibula, suffered when he scored the game-winning run on Saturday night.

He was injured rounding third base and collapsed on the plate to seal a 2-1, walk-off win over the Houston Astros.

He had to be helped off the field by the Oakland training staff and was taken for X-rays afterward.

Andrus, 33, is batting .243 with three home runs and 37 RBIs in 146 games this season, his first with Oakland after 12 seasons and two All-Star selections with the Texas Rangers.

In corresponding moves, left-hander Sam Moll was reinstated from the paternity list and infielder Vimael Machin was recalled from Triple-A Las Vegas.

Oakland began play Sunday four games out of the wild card with seven games to play.