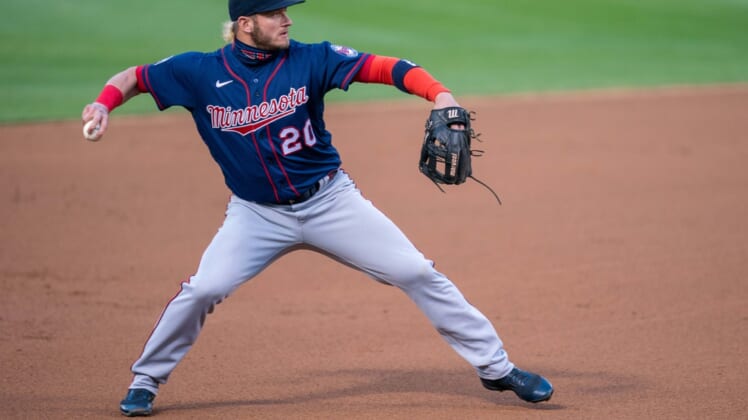 Jesus Luzardo teamed with two relievers to throw a two-hitter Tuesday night, and the host Oakland Athletics completed a doubleheader sweep of the Minnesota Twins with a 1-0 victory.

In the first of the day’s two seven-inning affairs, Mitch Moreland belted his first two home runs of the season, Matt Olson crushed a grand slam and Sean Manaea recorded his second career complete game, propelling the A’s to a 7-0 win.

The doubleheader was created when the Twins weren’t allowed to play Monday for COVID-related reasons.

The two shutouts gave the streaking A’s, winners of 10 straight, four shutouts in their past five games.

The nightcap was delayed 25 minutes by a light malfunction in left field.

Luzardo (1-1) allowed just one baserunner, a first-inning single by Josh Donaldson, before Jorge Polanco singled with one out in the fifth inning.

A bank of lights above the left field bleachers went dark following the hit, prompting both teams to leave the field. Oakland’s grounds crew was able to restore about one-third of the lights.

The game continued with left field in dusk-type darkness, and Luzardo returned to retire three of the next four batters he faced, turning over the ball to Lou Trivino in the sixth. Trivino got two strikeouts to end the inning.

Jake Diekman pitched around a hit batter and an error in the seventh to post his first save of the season.

Luzardo allowed just two hits and one walk in 5 1/3 innings. He struck out six. The three Oakland pitchers combined to fan 10.

Oakland scored the game’s only run on a one-out RBI single by Seth Brown, scoring Olson in the fourth inning.

Jose Berrios (2-2) was the hard-luck loser for the Twins, charged with one run on four hits in five innings. He walked one and struck out five.

Minnesota lost its third game in a row and fell for the eighth time in nine contests.