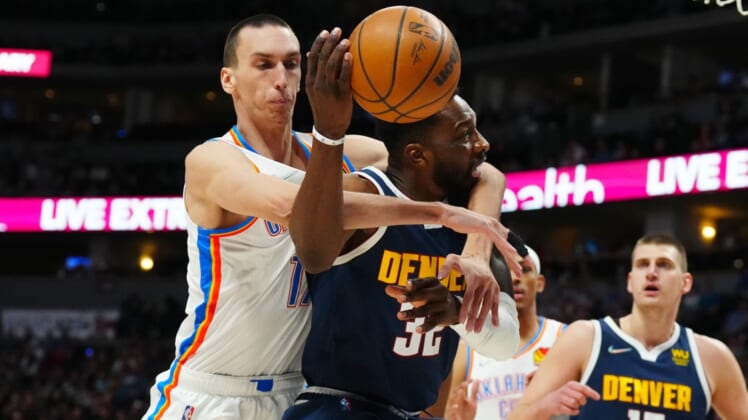 Will Barton scored 18 points for the Nuggets (44-31), who earned a split of the four-game season series with Oklahoma City.

Denver took the lead early in the first quarter and went ahead by as much as nine before taking a 32-25 advantage into the second quarter.

The Nuggets went on an 8-0 run on their way to pushing their lead to 58-42 with 1:08 left in the second quarter. However, Pokusevski hit a 3-pointer and Mann was fouled while sinking another 3-pointer and hit the free throw for a quick seven points to end the half.

Oklahoma City went on an 11-2 run early in the third quarter to pull within 62-60, but Denver responded. Jokic converted a three-point play, Barton made a coast-to-coast layup and Gordon hit a 3-pointer to stretch the lead to eight.

Bones Hyland started the final quarter with two free throws for the Nuggets, but the Thunder rallied. Wiggins, Pokusevski and Mann hit 3-pointers in less than two minutes to cut the deficit to 91-88 and prompt a Denver timeout.

The Nuggets went back up by five, but Oklahoma City tied it at 97 on Maledon’s bank shot midway through the fourth, and Pokusevski scored on a goaltending call with 2:51 left to put the Thunder in front 105-103.

Jokic’s floater and two Gordon free throws put Denver back in front, and Monte Morris hit a 3-pointer with 47.8 seconds left to make it 110-105.