Nuggets take out Spurs for second time in three days 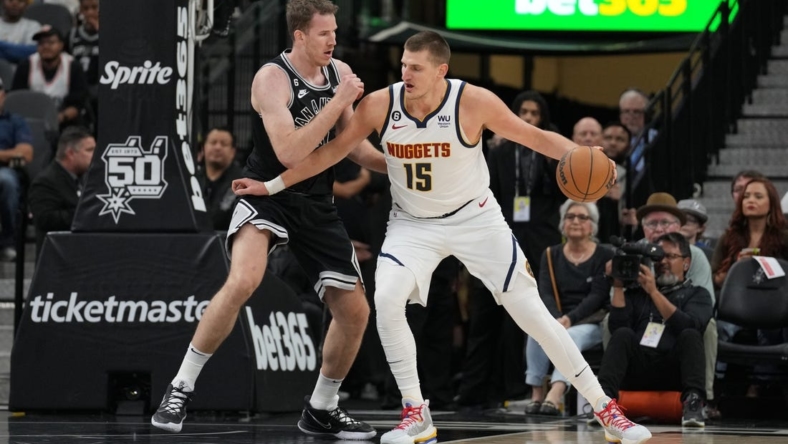 Nikola Jokic scored 26 points and dished out 10 assists, and he hit a key jumper in the final minute as the visiting Denver Nuggets held on to defeat the struggling San Antonio Spurs 115-109 on Monday in the second of two games between the teams in three days.

The Nuggets hammered San Antonio 126-101 on Saturday in Denver. But the rematch featured 11 ties and 25 lead changes. The Nuggets were in front by five points heading into the final period, but San Antonio rallied to go up 105-104 on Keldon Johnson’s cutting layup with 4:06 remaining.

Denver answered with a dunk by Jokic, a 3-pointer by Kentavious Caldwell-Pope and a layup by Jamal Murray to take a six-point advantage.

The Spurs responded as Devin Vassell canned a jumper and Josh Richardson hit a jumper to cut the lead to 111-109.

Jokic then hit a jumper and Murray dished to Aaron Gordon for a dunk, the latter with 29.9 seconds to play, to secure the win.

Johnson led all scorers with 30 points, while Richardson added 22, Tre Jones a career-high 20 and Vassell 17 points for San Antonio, which has dropped four straight games.

The game went back and forth in the first half, with the Spurs forging a seven-point lead 2 1/2 into the first quarter before the Nuggets rallied with an 8-0 run capped by a Porter 3-pointer for a 14-13 advantage.

An alley-oop dunk by San Antonio’s Charles Bassey at the buzzer tied the contest at 28 after one quarter.

The second quarter featured a series of runs for both teams with the lead changing hands three times before Denver finished the period with a 10-2 run to sweep into a 65-62 lead at the break.

Johnson led all scorers in the half with 15 points, while Richardson had 13 and Vassell 10 for the Spurs. Jokic and Porter paced Denver with 14 each, with Murray and Hyland adding 11 apiece for the Nuggets.