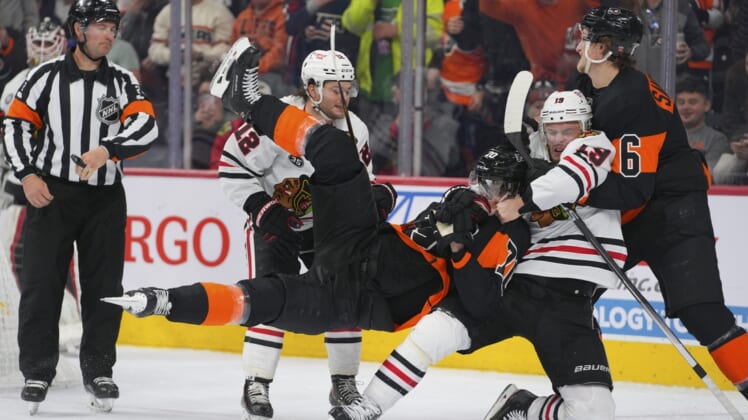 After playing one another for the first time in more than two years last Thursday in Boston, the Chicago Blackhawks and Boston Bruins will complete their home-and-home season series with a return matchup Tuesday night.

The Blackhawks split two recent road games, scoring four second-period goals on their way to a 6-3 win Saturday over the Ottawa Senators after the 4-3 setback in Boston.

Against Ottawa, Jonathan Toews and Caleb Jones both scored twice and Patrick Kane had three assists to become the second-leading scorer in franchise history, passing Bobby Hull. Kane now has 1,156 points for his career and points in six consecutive games.

“It’s pretty incredible for (Kane). He just seems to continue to do it,” Toews said. “Sometimes you take it for granted — it’s what you expect from him at this point, but it’s not to say that he (isn’t) a special player and just had an incredible career for the Blackhawks. It was fun to watch, and it was great to see again tonight.”

Chicago, which got 20 saves from Marc-Andre Fleury against the Senators, rebounded after two players were injured in the first period.

Just 2:40 in, defenseman Connor Murphy was taken off the ice on a stretcher with an upper-body injury following a hit in the corner that resulted in a major penalty to Ottawa’s Parker Kelly.

“He’s kind of a heart-and-soul guy,” Jones said of Murphy. “It’s tough to bounce back. I think we had to kind of get our feet under us there the rest of the first, and we just came out in the second and said, ‘Let’s win this one for Murph.'”

The “good news,” according to coach Derek King, was that Murphy was set to return to Chicago following the game. The same was true for center Tyler Johnson, who took a puck off the side of the head and left due to concussion protocol.

“(I told them to) relax and just play,” King said. “We were just off a little bit, whether it was from seeing your teammate get stretchered off or not. I just kind of calmed them down and (said) focus on a period at a time and then go out there and play hockey. And they … did a great job.”

It is unclear how long Murphy will be out.

The Bruins won two one-goal games before hitting the road for the next four. They haven’t lost in regulation since March 1 in Anaheim following Saturday’s 3-2 win against Arizona. It was Boston’s ninth win in 11 games (9-1-1).

Craig Smith scored a pair of first-period goals before Charlie Coyle broke a 2-2 tie with 3:21 left in regulation to lift the Bruins.

“They’re feeling good about themselves right now, and that can be dangerous,” Bruins coach Bruce Cassidy said of the line. “I think consistently playing together helps.”

Jeremy Swayman made 27 saves, improving to 9-0-1 in his last 10 starts. Linus Ullmark will take the net in Chicago.

Boston’s Nick Foligno is due to play in his 1,000th career NHL game. He and his father, Mike (1,018 games), will become the second father-son combination to reach that milestone, joining Bobby and Brett Hull.