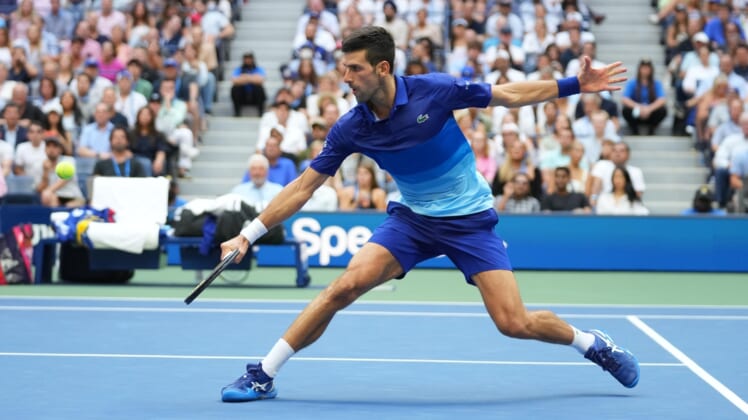 Top seed Novak Djokovic dropped a set, but the Serbian survived the upset bid and defeated Hungary’s Marton Fucsovics 6-2, 4-6, 6-3 Tuesday in the Round of 32 at the Rolex Paris Masters.

Of Fuscovics’ eight aces, he dialed up seven in the second set while winning 19 of 21 first-service points (90.5 percent) to win the set. Djokovic lost his serve in the third set at 3-2 but then fended off his opponent by winning three of the final four games.

Djokovic, seeking to extend his tournament record and win his sixth title, hadn’t played a competitive match since the U.S. Open, where he was defeated in the finals by Daniil Medvedev to deny a record 21st Grand Slam title.

“It was great to be back on the court after almost two months without competition,” Djokovic said. “I did not expect anything but I knew this was not going to be an easy match.

“Marton is a very talented player, he has a lot of quality. It was a great fight. I couldn’t break his serve, he was playing with a lot of precision and we pushed each other to the limit. It was a great opening match for me. I am very pleased.”

Of Tuesday’s 16 matches, only two were Round of 32 tilts. Norway’s Casper Ruud, seeded sixth, joined Djokovic in reaching the Round of 16 by beating Kazakhstan’s Alexander Bublik 6-4, 6-0, in just shy of 78 minutes.

The only seeded player to fall Tuesday was Spanish No. 14 seed Roberto Bautista Agut. Australia’s James Duckworth eliminated him in a close result, 6-4, 5-7, 7-6 (4).

But plenty of other matches went the distance. Canadian ninth seed Felix Auger-Aliassime rallied for a 4-6, 6-4, 6-1 victory over Italian qualifier Gianluca Mager.

“I had difficulty with my pace at the beginning of the match,” Auger-Aliassime said. “I didn’t hit enough first serves so I had a bit of pressure on my second serve. So I could have served better in the first set. I (had) a poor game at 4-all and I got broken, but even before that there were moments at 30-all it was a bit hot and a bit tight. I think I relaxed.”