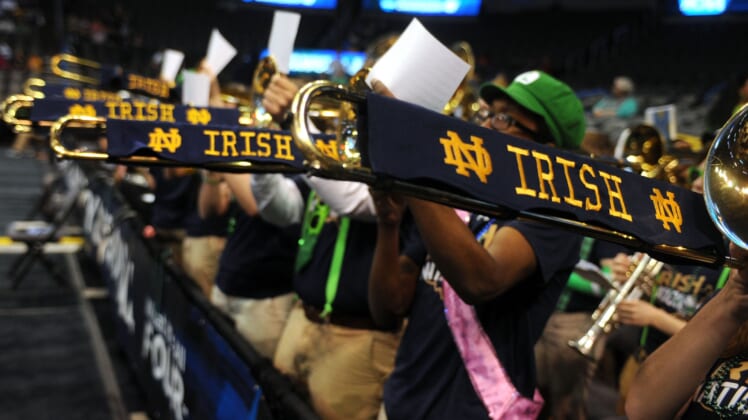 Mar 29, 2015; Oklahoma City, OK, USA; Members of the Notre Dame Fighting Irish pep band entertain fans prior to action against the Baylor Bears during the first half in the finals of the Oklahoma City regional of the 2015 women’s NCAA Tournament at Chesapeake Energy Arena. Mandatory Credit: Mark D. Smith-USA TODAY Sports

You either love Notre Dame, or you hate them—that’s just the way it is.

If you’re a Notre Dame hater, one of your arguments most likely has been the fact that the entire program was outdated, and you are absolutely correct. However, slowly but surely, the Irish are updating and invigorating the world of college football.

How so? Read on to find out.

Partnering with Under Armour

Prior to this massive, groundbreaking deal, Adidas sponsored Notre Dame for 17 years. Adidas produces a fine product and is the clothing of choice for major powerhouses like Michigan, Miami, Nebraska and Texas A&M. In fact, Adidas is the brand of choice for 31 of the 128 available football schools, but that number is slowly decreasing and Under Armour’s 15 schools is only increasing.

The perception of Adidas is outdated, stale, boring and plain, where Under Amour is seen as sexy, flashy, cool and ambitious. With the upgrade in uniforms and an increase in perception value, Notre Dame not only became more enticing to recruits but also to its fans.

After 84 seasons of natural grass, Notre Dame Stadium made the upgrade to turf in 2014. This change in playing surface received a lot of backlash from many Notre Dame traditionalists, but the change was long overdue. Many Notre Dame haters accused the Irish for purposely not cutting the grass to slow teams down. Also, during rain games, the field became a giant slip and slide, and players automatically became injury-prone.

Interestingly enough, Notre Dame sold pieces of stadium grass for $150, if you’re into that kind of thing. With the upgrade to FieldTurf, visiting teams have no more excuses, and Notre Dame now can attract top-talent and start to seriously compete with the rest of the FBS.

Playing Under the Lights

Notre Dame installed permanent lights in 1997. They were paid for by NBC, which has aired all home games for the past 20 years. However there was one small caveat to the installation of permanent lights; no night games were allowed. Yes, you read that correct. The lights were installed to “ensure sufficient lighting for mid-afternoon games in November.” Be that as you may, Notre Dame and NBC finally lifted this bizarre “no night game policy” in 2011 when the Irish played host to USC, losing 31-17. P

er Notre Dame and NBC’s TV contract, the Irish will have three night games at Notre Dame Stadium in each two-year cycle. Not allowing night games at arguably the most famous college football program is down right absurd, no matter whom you ask. But also having an independent TV contract (worth $15 million annually) with one of America’s most historic companies is absurd as well. Hosting regular night games in prime time is definitely a step in the right direction to joining the 21st century.

“A Season With Notre Dame”

Notre Dame is granting Showtime an all-access pass to its 2015 season in a new series called “A Season With Notre Dame.”

Similar to HBO’s Hard Knocks, “the series chronicles the University of Notre Dame’s quest for a college football playoff national championship with weekly, all access coverage,” said a Showtime representative.

The series will give an inside, no holds barred, look at Irish players both on and off the field. The first episode will air September 8.

Beginning in 2009, Notre Dame now plays one of its home games every year at a neutral site—but not just any neutral site. To date, the Irish have played in famous venues including the Alamodome, Yankee Stadium, FedEx Field, Soldier Field, AT&T Stadium and Lucas Oil Stadium.

This coming November Notre Dame will be adding iconic Fenway Park to this list as they take on Boston College on November 21. The Shamrock Series allows Notre Dame to bring their historic “football weekend” atmosphere to fans all around the country, while giving its student-athletes opportunities of a lifetime.

Finally Joining a conference…sort of

In 2014, all Notre Dame sports moved from the Big East to the ACC conference, except for football. However, the Irish football team will play on average five games annually against ACC schools. So what is the benefit to Notre Dame “sort of” joining the ACC in football? They now have access to the Orange Bowl and the ACC’s non-BCS bowl tie-ins.

One major downside is with the addition of five new ACC games each year, some former, historic, Notre Dame rivalries will be cut. This includes Michigan, Michigan State and Purdue. On the plus side, Notre Dame will now travel to parts of the country previously unchartered, like in 2014 when they almost pulled off the upset at Florida State. This season, the Irish will travel to Virginia, Clemson and Pittsburgh and will play host to Georgia Tech and Wake Forest. They also battle Boston College at Fenway Park in November.

Notre Dame Stadium will be adding premium seating, wider vinyl bench seating and a 96 feet by 54 feet video screen, among other internal upgrades. The video screen will not feature any commercials and will give fans a chance to see replays, but not until its installation in 2017. There will be approximately 3,000 premium seats added, most of which are already sold out, and the bench seating will increase from 16 to 18 inches. Now, if only they would replace bench seating with real stadium seating…

Notre Dame kicks off the season on Saturday night when they play host to the Texas Longhorns at 7:30 ET, under the lights. Notre Dame is 8-2 all time vs. Texas, and the historic school has been victorious in the last four meetings. The last time the two schools met the Spice Girls had a number one hit with “Wannabe”, and Notre Dame won 27-24. This year, Notre Dame is the favorite by 10 points.