No NFL International Games in 2020 Due to Pandemic 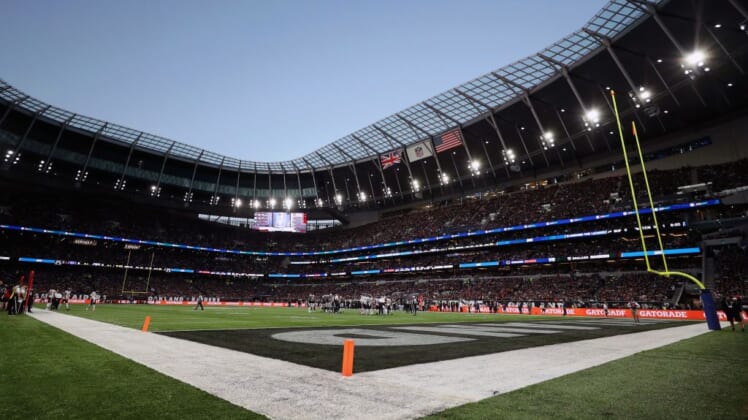 LONDON, ENGLAND - OCTOBER 06: General view inside the stadium during the game between Chicago Bears and Oakland Raiders at Tottenham Hotspur Stadium on October 06, 2019 in London, England. (Photo by Naomi Baker/Getty Images)

The Las Vegas Raiders are no stranger to NFL international play in both the UK and Mexico, but they won’t this year and neither will any teams the league announced.

In a move that isn’t really a surprise, the league released a statement today saying the NFL international slate of games in the UK and Mexico are canceled in 2020 due to health concerns over the coronavirus. The league is scheduled to release its 2020 season schedule later this week.

In a statement released Monday, the league said it had made the decision in consultation with its teams, national and local governments, the players union, doctors, and its international partners. The NFL international series has been a priority focus for the league as it looks for future growth opportunities outside the United States.

“After considerable analysis, we believe the decision to play all our games domestically this season is the right one for our players, our clubs, and all our fans in the US, Mexico and UK,” said NFL Executive Vice President, Chief Strategy & Growth Officer Christopher Halpin.  “We greatly appreciate the support of our governmental and stadium partners in Mexico and the United Kingdom, who all agree with this decision, and we look forward to returning for games in both countries in the 2021 season.”

The NFL was scheduled to play four games in London in 2020 – two at Tottenham Hotspur Stadium where the Raiders played last year, and two at Wembley Stadium. Azteca Stadium in Mexico City was to host the country’s lone NFL game in 2020.

The Raiders, despite having played internationally over the past three consecutive seasons, were not scheduled to play during the international series in 2020.

With the league schedule release coming later this week, it’s unknown how the season will progress based on the uncertainty surrounding the COVID-19 worldwide pandemic. The NFL has time to plan, and as Sports Business Journal’s Ben Fischer told us Sunday on our CBS Sports Radio 1140 show, the league is making plans and could delay the season by as much as 45 days.

Still unknown is whether or not spectators will begin the season in the stands at the Raiders new Allegiant Stadium Las Vegas or how that issue will be addressed league-wide.