No. 9 Creighton gets past St. Thomas in opener 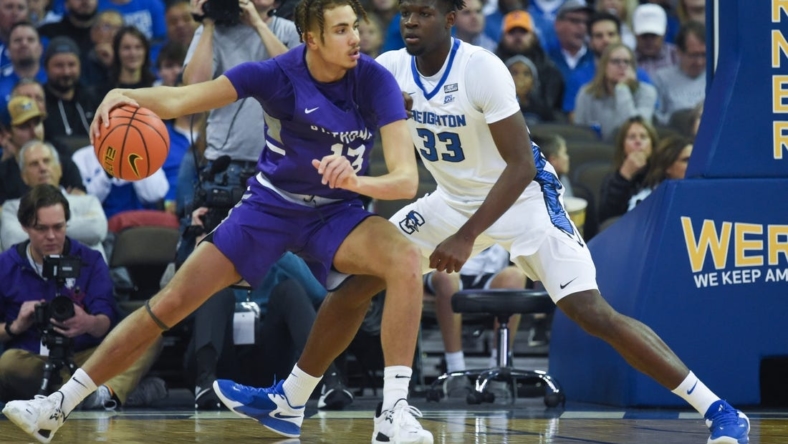 Arthur Kaluma collected 17 points and eight rebounds to fuel host No. 9 Creighton to a 72-60 victory over St. Thomas in the season opener for both teams on Monday in Omaha, Neb.

Trey Alexander scored 12 points and South Dakota State transfer Baylor Scheierman added 11 points and 10 rebounds for the Bluejays (1-0), who benefited from a 14-0 run in the second half to help put away the upstart Tommies.

Creighton, which was picked to finish first in the 2022-23 Big East Preseason Coaches’ Poll, also was paced by Ryan Kalkbrenner (eight points, nine rebounds). The Bluejays, however, made just 39.4 percent of their shots from the floor (26 of 66) and 23.5 percent from 3-point range (8 of 34).

St. Thomas’ Andrew Rohde scored 15 points, Brooks Allen added 14 and Riley Miller had 13. Parker Bjorklund had nine points and Will Engels recorded seven points and a team-high nine rebounds for the Tommies (0-1), who provided a scare by making 40.9 percent of their 3-point attempts (9 of 22).

St. Thomas slowly erased an early 15-point deficit and Allen sank a 3-pointer to give his team a 57-56 lead with 9:58 remaining in the second half. Scheierman, last season’s Summit League Player of the Year, converted from well beyond the arc to regain the lead for Creighton and answered a timeout with another 3-pointer.

Kalkbrenner and Kaluma each added a two-handed dunk, Ryan Nembhard sank a pair of free throws and Kaluma made a layup to cap the Bluejays’ 14-0 run.

Rohde drained a 3-pointer with 2:45 to play to end the surge with the Tommies’ first field goal in over seven minutes.

Scheierman sank a 3-pointer to give Creighton a comfortable 26-11 lead at 10:32 of the first half. St. Thomas chipped away as Miller made a pair of 3-pointers and Rohde added one to trim the deficit to two points before Nembhard converted from beyond the arc to stake the Bluejays to a 40-35 lead at halftime.