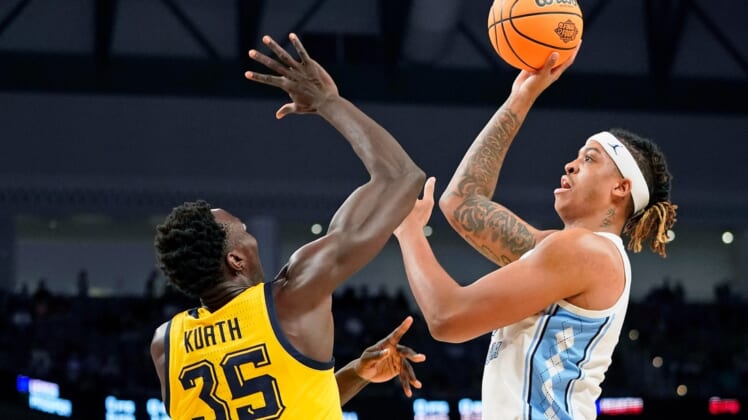 Caleb Love scored 21 of his 23 points in the first half. Armando Bacot added 17 points and 10 rebounds, and Puff Johnson posted 11 points off the bench as the Tar Heels won for the seventh time in their last eight games.

North Carolina (25-9) will meet top-seeded and defending champion Baylor, who drubbed Norfolk State 85-49 in the opening round, in Saturday’s second round.

Olivier-Maxence Prosper scored 16 points and Darryl Morsell had 11 points for Marquette (19-13), which finished its season under first-year coach Shaka Smart. It was a rough return to the Lone Star State for Smart, who had been the Texas coach.

Manek, who shot 10-for-15 from the field and made half of his 10 attempts from 3-point range, also pulled in 11 rebounds.

“This is the game I wanted to get back,” Manek said. “I want to get back to this spot. We just have to keep playing hard and doing what we did today.”

Even R.J. Davis, who shot 1-for-10 from the floor, made contributions on offense by delivering 12 assists.

All six of Love’s field goals were 3-pointers. He also went 5-for-7 on free throws.

“Just keeping us all locked in, sticking to the game plan,” Love said. “We just came out here and performed.”

North Carolina’s lead stretched to more than 30 points early in the second half.

North Carolina used an 11-0 run for an 18-8 lead while Marquette went more than 5 1/2 minutes without scoring. It only got worse for the Golden Eagles.

The Tar Heels held a 32-16 rebounding edge at the half.

Tyler Kolek ended up with 10 assists for Marquette, which was charted with just 15 total assists.