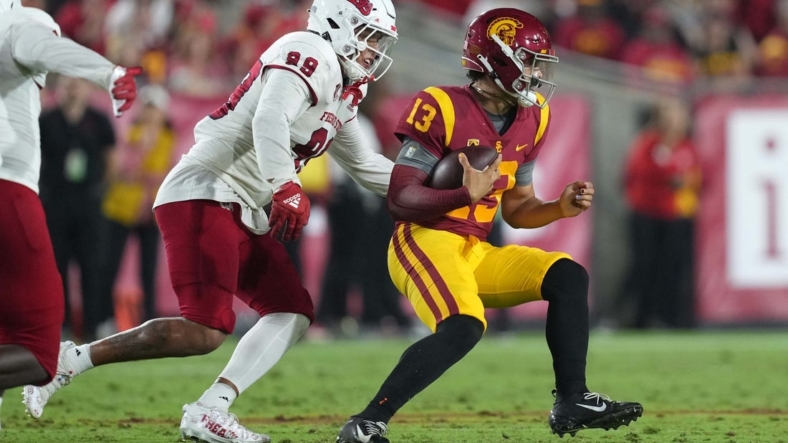 The Trojans (3-0) surpassed 500 yards of total offense for the third time in as many games, piling up 517. But while quarterback Caleb Williams stole the show in USC’s first two outings with his passing, this was the Trojans run game’s turn to shine.

Jones went for 110 yards, while Dye added 102, marking the first time since November 2018 two USC ball-carriers reached 100 yards in the same contest. Both scored a rushing touchdown, and both averaged more than nine yards per carry on the night.

Williams, meanwhile, carried for more touchdowns with two than his total net yards of one. He also threw for a pair of scores, including a 2-yard score to Jordan Addison to kick off the game’s scoring.

Addison has caught at least one touchdown in each of his first three games as a Trojan.

Williams also connected with Malcolm Epps on a 10-yard score, part of the quarterback’s 25-for-37, 284-yard passing performance. The USC offense was also excellent on third and fourth downs, going a combined 9-of-15 on conversion attempts.

Fresno State (1-2) came in looking to assert its passing attack behind Jake Haener, but the Bulldogs quarterback went down awkwardly on a sack-fumble by Solomon Byrd in the third quarter.

Haener finished 10-of-18 with a 39-yard touchdown pass to Erik Brooks and an interception. Reserve Logan Fife completed 11-of-12 attempts for 140 yards, but failed to lead a Bulldogs scoring drive.

Jordan Mims rushed for 114 yards in the loss, and Malik Sharrod carried for a 32-yard touchdown.