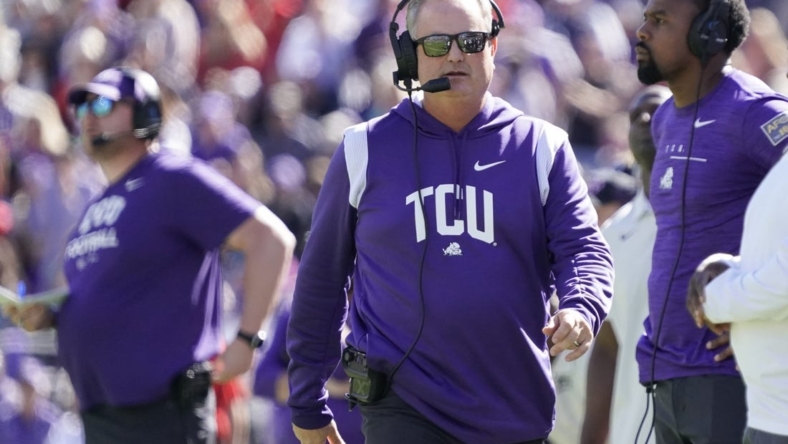 No. 4 TCU puts its undefeated season and shot at a spot in the College Football Playoff on the line when it plays dangerous but enigmatic No. 18 Texas on Saturday in a titanic Big 12 Conference dustup in Austin, Texas.

The Longhorns opened as a 6 1/2-point favorite to beat TCU despite the Horned Frogs’ lofty ranking as one of the top four teams in the CFP rankings, Texas’ three losses and TCU’s recent success in the series.

TCU climbed from seventh to fourth in the CFP ranking that was released Tuesday. The Horned Frogs (9-0, 6-0 Big 12) are one of just four undefeated teams in FBS, with their latest outing producing a 34-24 victory at home over Texas Tech.

TCU trailed 17-13 heading to the fourth quarter but went to the front and then cemented the game with 21 unanswered points. Quarterback Max Duggan was 12-of-23 passing for 195 yards and two touchdowns. Derius Davis had an 82-yard punt return for a score and caught a 23-yard pass for another TD, and Kendre Miller racked up 158 yards rushing and a touchdown in the win for TCU.

The Horned Frogs played without big-play receiver Quentin Johnston because of an ankle injury.

“The great thing about this team is they’ve got a lot of confidence,” TCU coach Sonny Dykes said. “They feel if we can get the game into the second half with a chance to win, we’re going to figure out how to do it.”

Four of TCU’s wins are against teams it lost to by at least two scores last season, including three by at least three scores. This is the first time the Horned Frogs are 9-0 since 2010 when they finished 13-0 and won the Rose Bowl.

“I think in some ways, you know, we might have exceeded expectations up to this point — externally,” Dykes said. “I don’t know that we have internally. I don’t know that anybody (in our building) is really that surprised.”

The Longhorns defeated Kansas State for the sixth straight time, snapped a five-game road losing streak and rose six spots from 24th in the initial CFP rankings. Texas led 31-10 after a dominating first half and barely held on, forcing a Kansas State fumble on a potential game-tying drive in the final minute.

“I think our guys are going to prepare really well,” Texas coach Steve Sarkisian said. “I think they saw a lot of value in their preparation last week, not only in meetings but on the practice field in the recovery, and we’re going to need that again this week as we get ready to play.”

The Horned Frogs have owned Texas since they joined the Big 12 in 2012, winning seven of the 10 games with the Longhorns and four of the five that have been played in Austin.

“We haven’t beaten the Top-5 team here in DKR since 1999 so it’s a great opportunity for us to hopefully prepare well and play well,” Sarkisian said. “We are looking forward to an electric and a great intimidating environment.”