Oklahoma coach Lincoln Riley isn’t about to use the success some FCS teams had against FBS teams last week as any motivation for his team when the No. 4 Sooners host Western Carolina on Saturday.

Riley’s team, after a disappointing second half in a season-opening 40-35 win over Tulane a week ago, has enough issues of its own to fix.

“We were too circumstantial the other day,” Riley said. “That was our problem. We were worried about the scoreboard, all the other circumstances as opposed to (playing) our brand of ball, our standard of ball, regardless of any of those outside factors. So not using those (other games) with our guys. Our focus is, if we’ve got any chance of being a good football team, we’ve got to figure out how to play four quarters.”

The Sooners need to clean up a variety of things – run blocking, defensive lapses in coverage and finishing strong, according to Riley.

Tulane outscored Oklahoma 21-3 in the second half of the opener, continuing a troubling theme in recent seasons for the Sooners (1-0).

Kansas State outscored Oklahoma 17-0 in the fourth quarter a year ago to pull off an upset and then Iowa State outscored the Sooners 24-13 in the second half a week later to win.

However, it wasn’t just those losses last season. Texas outscored Oklahoma 14-0 in the fourth to force overtime before the Sooners won in four overtimes and in the Big 12 Championship Game, Oklahoma managed just three points in the second half as Iowa State nearly overcame what was a 17-point deficit at the break.

Riley hopes the second-half woes don’t become a trend in 2021 like they did a year ago.

“A lesson is only a lesson if you learn it,” Riley said. “It’s a great opportunity for us to learn something. We’ll see if we’re a mentally tough enough team and we’ll see if we listen good enough to learn it.” 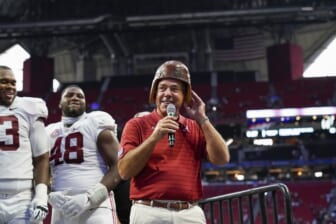 The Sooners are facing an FCS opponent for the third consecutive season but haven’t made much of a habit of it, with Saturday’s game being just their seventh against an FCS opponent since 1992.

Oklahoma has won those games by an average of nearly 55 points.

Western Carolina has regularly faced FBS opponents, including a pair of losses last season to ranked opponents — 58-14 to Liberty and 49-9 to North Carolina.

It will be the first Oklahoma home game with full attendance allowed since the end of the 2019 season.

“That’s the big key for us, how we’re going to handle that environment,” Bell said. “But I tell you one thing, I know one guy I won’t worry about, and that’s (quarterback) Rogan Wells. Rogan, every time I’ve seen him have to be put on a big stage or it’s his time or we’re expecting a lot from him, he always rises to the occasion.”

In last week’s 31-28 season-opening loss to Eastern Kentucky, Wells threw for 275 yards and a touchdown with two interceptions and rushed for 67 and another score.