No. 4 Kentucky rolls in opener despite missing 3 starters 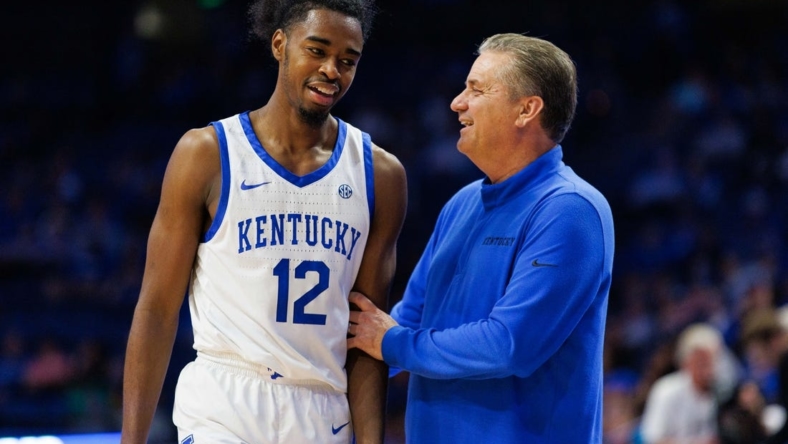 Antonio Reeves scored 22 points off the bench and CJ Fredrick added 20 as No. 4 Kentucky opened the season with a 95-63 victory against visiting Howard despite playing without three starters Monday night.

Fredrick, a transfer from Iowa, was making his Wildcats debut after missing all of last season due to a hamstring injury. Jacob Toppin added a double-double with 15 points and 11 rebounds as Cason Wallace scored 15.

Oscar Tshiebwe, the reigning national Player of the Year, and All-SEC guard Sahvir Wheelers were sidelined by injury and Damion Collins missed the game in the wake of his father’s death last week.

Howard scored first in the second half on a layup by Jelani Williams, but Fredrick later had two baskets and a 3-pointer during a 12-0 run that gave Kentucky a 63-30 lead.

Hawkins scored five points as the Bison trimmed the lead to 65-40, but Reeves answered with a 3-pointer and the Wildcats eventually pushed the lead back to 30. Their biggest lead was 38.

Wallace had three consecutive Kentucky baskets as the Wildcats opened a 16-7 lead.

The Bison got within six points twice before Fredrick made a 3-pointer and another jumper to help Kentucky open a 31-16 lead.

The lead grew to 18 before Steve Settle III converted a three-point play to pull Howard within 36-21.

Fredrick made three free throws as the Wildcats opened a 21-point lead and Ugonna Onyenso converted two layups in the final minute, pushing the lead to 49-26 at halftime.