No. 4 Gonzaga looks to maintain mastery of Pepperdine 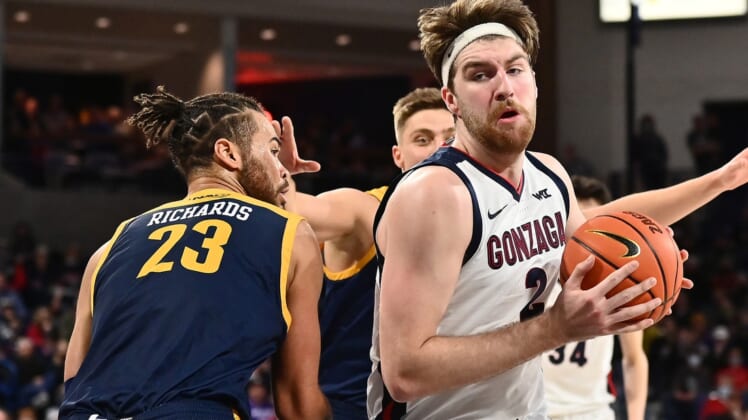 Both teams were initially slated to start the WCC portion of their schedules against other schools before COVID-19 outbreaks led to postponements.

The Bulldogs were scheduled to open at San Diego on Dec. 30, but the Toreros’ outbreak led to a postponement. Then Gonzaga had its own COVID-19 issues, prompting a game at Loyola Marymount (Jan. 1) and a home contest against San Francisco (Thursday) to be postponed.

Pepperdine was slated to open on Jan. 1 at Pacific, but the Tigers’ COVID-19 issues led to a postponement. Thursday’s home game against San Diego was also postponed with the Toreros still dealing with an outbreak.

Long stretches without many games is part of the territory during the COVID-19 era.

Gonzaga will have played just three games in a 29-day span before taking the court Saturday as it looks to increase the nation’s longest homecourt winning streak to 60 games.

The Bulldogs routed North Alabama 93-63 on Dec. 28 in their most recent contest. Julian Strawther scored a team-high 15 points as Gonzaga had five players score in double digits.

“Our offense was pretty efficient,” Few told reporters afterward. “We can put eight or nine guys out there who are capable of double figures.”

Star forward Drew Timme leads the Zags in scoring (16.7 points per game) and has made 60.9 percent of his field-goal attempts.

Bolton leads the Bulldogs with 27 3-pointers, two more than Strawther. Bolton has shot a team-best 44.3 percent from behind the arc.

Pepperdine last played on Dec. 23 when it beat NAIA program Westmont 96-69. The Waves have won four of their past five games.

Freshman forward Maxwell Lewis emerged in the contest with a career-best 27 points. The splurge raised Lewis’ scoring average to 9.1.

“I feel like I’m getting my confidence up and I’m playing more in the system,” Lewis said after the contest. “Just getting used to the college game plan — I think I’m getting more comfortable with that.”

Pepperdine is 0-7 away from home, including five road setbacks. The Waves’ worst showing was an 82-48 loss at UC Irvine on Nov. 20.