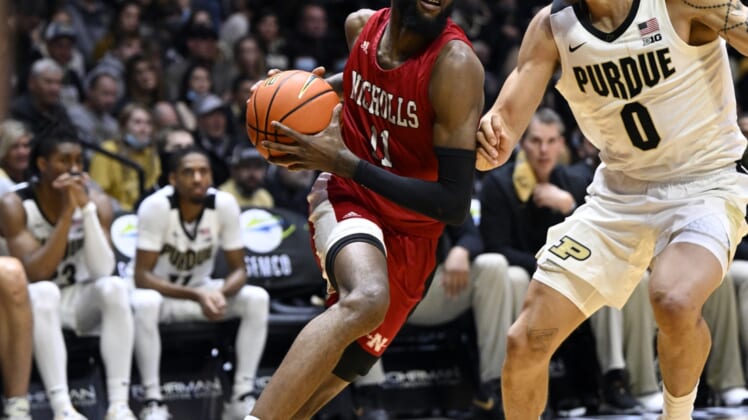 Zach Edey needed just 16 minutes of action Wednesday afternoon to score 21 points and his Purdue teammate Jaden Ivey added 19 as the No. 3 Boilermakers rolled to a 104-90 victory over visiting Nicholls State in West Lafayette, Ind.

In its final nonconference game before jumping exclusively into Big Ten play, Purdue (12-1) hit 14 of 29 shots from beyond the arc, with 11 of the 3-pointers coming in the first half. For the game the Boilermakers shot 57.4% from the floor.

Sasha Stefanovic led the long-distance barrage, making four 3-pointers on his way to 14 points. Isaiah Thompson made three treys in scoring 15 points. Trevion Williams added nine points, 11 rebounds and eight assists for the Boilermakers, who were credited with 30 assists on 35 made baskets.

For Nicholls State (8-6) Ty Gordon hit nine 3-pointers on his way to 29 points. Ryghe Lyons scored 20 and Latrell Jones added 18 for the Colonels of the Southland Conference, who were without two of their top four scorers as Devante Carter and Emmanuel Little were on the COVID list.

Consecutive 3-pointers by Gordon helped Nicholls State to an early 17-11 lead. But Purdue answered with a 20-0 run to take a lead that the Colonels never seriously challenged.

Reserve Brandon Newman triggered the run with a pair of 3-pointers, sandwiched around a traditional 3-point play by Edey.

Stefanovic added a 3-pointer and Mason Gillis (10 points) closed the run with a 3 as the Boilermakers grabbed a 31-17 advantage midway through the first half.

Purdue was so effective during the run that it needed only 3:48 to score the 20 points. The Boilermakers entered the game averaging 1.22 points per possession, the top figure in Division I.

Before the half was over, Purdue stretched its lead to 22 points as Thompson hit two 3-pointers, Ivey and Stefanovic added one each and reserve Ethan Morton scored on a driving 3-point play.

In the second half, Nicholls got drew to within 86-71 with 6:41 remaining, but successive baskets by Thompson extended the lead back to 21 and removed any suspense.