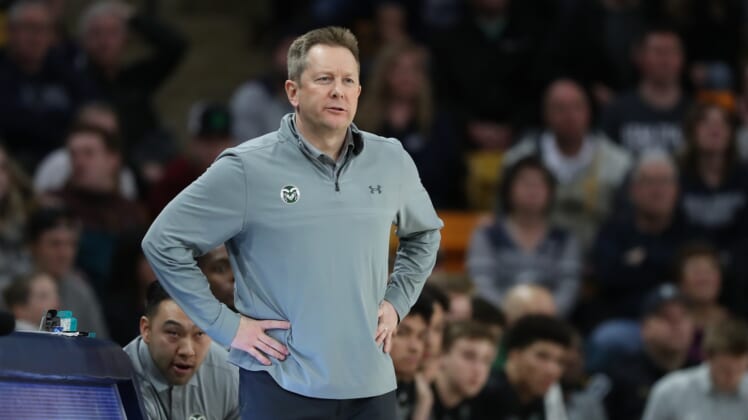 Chandler Jacobs scored on a layup with 1.8 seconds remaining to give No. 23 Colorado State a 53-51 victory over Utah State in the Mountain West quarterfinals on Thursday night at Las Vegas.

Isaiah Stevens had 14 points, seven rebounds and five assists for second-seeded Colorado State (25-4), his best pass being when he fed Jacobs for the winning points. The Rams will face either third-seeded San Diego State or sixth-seeded Fresno State in Friday night’s semifinals.

David Roddy added 13 points and six rebounds for Colorado State, which has won nine of its past 10 games.

Bean became the third player in Utah State history to reach 1,000 career rebounds. His total sits at 1,011 and he resides in second place after passing school Hall of Famer Greg Grant (1,003 from 1982-86).

Colorado State connected on 42.6 percent of its shots and also struggled from long distance, hitting just 3 of 18.

Rylan Jones scored on a layup with 43.4 seconds remaining to pull the Aggies within 51-49.

Colorado State’s Kendle Moore missed the front end of a 1-and-1 with 12.8 seconds left and Roddy was called for a foul with 12.3 seconds to play. Bean made both free throws to tie the score at 51.

The Rams passed on calling timeout and Stevens drove into the lane and spotted the open Jacobs, who scored his only points of the game.

Colorado State scored the final nine points of the first half to hold a 29-25 lead. Stephens capped the burst with a 3-pointer with 4.8 seconds left.

Utah State’s Max Shulga hit a jumper from the left corner with 10:11 remaining to knot the score at 39.

Horvath and Jones later scored back-to-back baskets as the Aggies inched ahead at 45-44 before John Tonje hit a jumper to push Colorado State back ahead by one with 4:11 remaining.

Stevens’ short shot bounced off the front of the rim and dropped in to give the Rams a 51-47 lead with 54.3 seconds left.