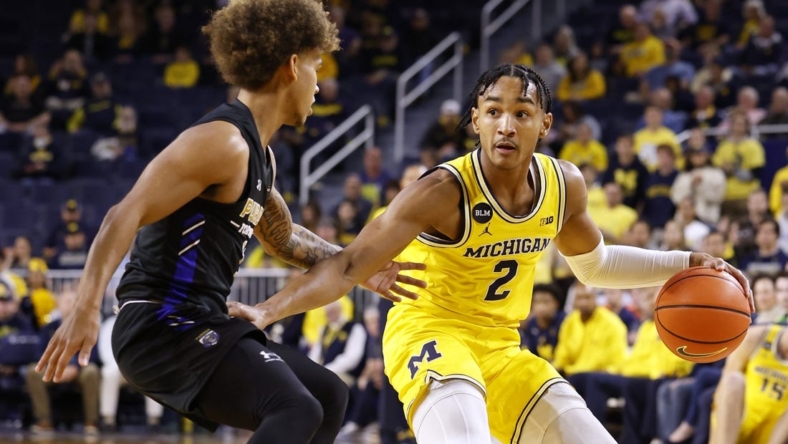 Hunter Dickinson had 22 points and 12 rebounds, Jett Howard supplied 21 points in his debut, and host No. 22 Michigan defeated Purdue Fort Wayne 75-56 in the season opener for both teams at Ann Arbor, Mich., on Monday.

Michigan had a 36-20 advantage in points in the paint, committed only eight turnovers and limited Fort Wayne to 29.6 percent shooting.

Quinton Morton-Robertson led the Mastodons with 15 points and Bobby Planutis tossed in 13.

The Wolverines scored 14 points off 12 Fort Wayne turnovers to take a 40-28 halftime lead.

The Mastodons took an 8-4 lead in the first five minutes. The Wolverines then erupted for 20 unanswered points.

Dickinson made three layups during that stretch, while Baker knocked down a pair of 3-pointers. Howard, son of head coach Juwan Howard, also made a 3-pointer and Bufkin finished it off with a layup off a Fort Wayne turnover.

The Mastodons answered with a 9-1 run, including five points from Morton-Robertson.

A 7-0 Michigan spurt, capped by a Howard layup off another Mastodons turnover, gave the Wolverines a 35-19 lead.

After Fort Wayne cut its deficit to single digits, Howard closed out the half with a 3-pointer.

Howard opened the second half with another long ball. A pair of Dickinson dunks increased Michigan’s advantage to 49-31.

A corner 3-pointer by Baker six minutes into the half pushed the Wolverines’ lead past 20 points. Michigan led by as much as 24 but Fort Wayne cut that in half with 12 unanswered points.

A Dickinson layup halted that outburst. Howard soon gave his club more breathing room with a pair of 3-pointers and a transition layup to make it 69-49.