No. 2 Oklahoma opener vs. Tulane moves from New Orleans to Norman

Tulane and No. 2 Oklahoma moved their scheduled Saturday college football game from New Orleans as recovery efforts ramp up in the wake of Hurricane Ida.

Oklahoma will host the game in Norman at Gaylord Family-Oklahoma Stadium, where the Sooners are scheduled to play each of the following three weeks.

Ida made landfall on Sunday and left New Orleans without power, likely for several days. 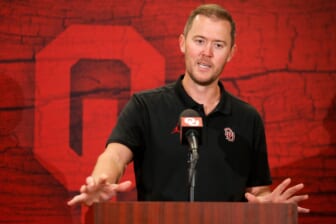 Tulane visited Oklahoma in 2017 to start what is scheduled to be a three-game series, with games this season and in 2024. The 2024 game is expected to now shift to Tulane.

Oklahoma was also No. 2 in the country for the 2017 game. After falling behind 7-0 and 14-7, the Sooners won 56-14 behind four touchdown passes from Baker Mayfield.