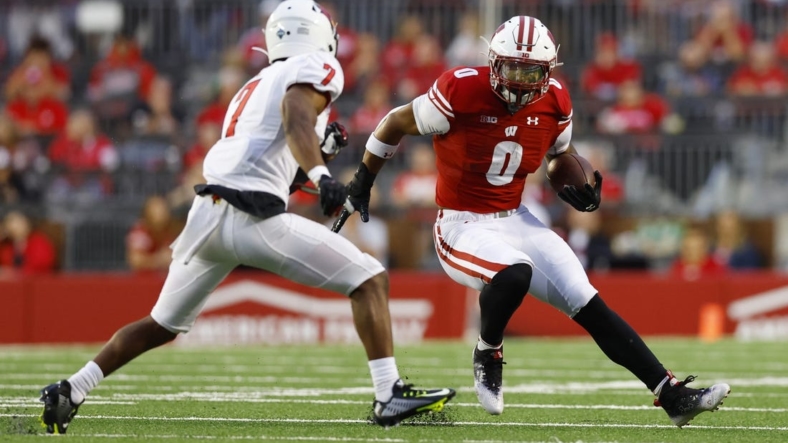 John Torchio scored on a 100-yard interception return and Braelon Allen on a 96-yard run as No. 18 Wisconsin rolled to a 38-0 nonconference victory over visiting Illinois State on Saturday in Madison, Wis.

Allen finished with 148 yards on 14 carries, including a 1-yard touchdown. Graham Mertz completed 14 of 16 passes for 219 yards and one touchdown.

Torchio turned the game in the first quarter with the longest interception return for a touchdown in Wisconsin history.

On their second possession, the Redbirds moved from their own 20 to a first down at the Wisconsin 12 with the aid of two 15-yard penalties. On third down from the 9, Torchio stepped in front of Zack Annexstad’s pass at the goal line and cut to the right side, picking up a key final block at the Redbirds 30.

On the Badgers’ next possession, Allen bounced right off a clogged middle and went 96 yards to put Wisconsin up 14-0. It was the Badgers’ longest touchdown run in school history, breaking the mark of 93 yards by James White in 2013.

The Badgers opened the second half with a 59-yard scoring drive, capped by Allen’s 1-yard touchdown run to make it 24-0.

Annexstad, a transfer from Minnesota, completed 16 of 24 passes for 186 yards with two interceptions for the FCS Redbirds, who dropped to 1-9 vs. Big Ten opponents.

Illinois State was hampered by the loss of Cole Mueller, who rushed for a team-high 977 yards last season. He was carted off with an apparent leg injury midway through the first quarter after three carries for 21 yards.