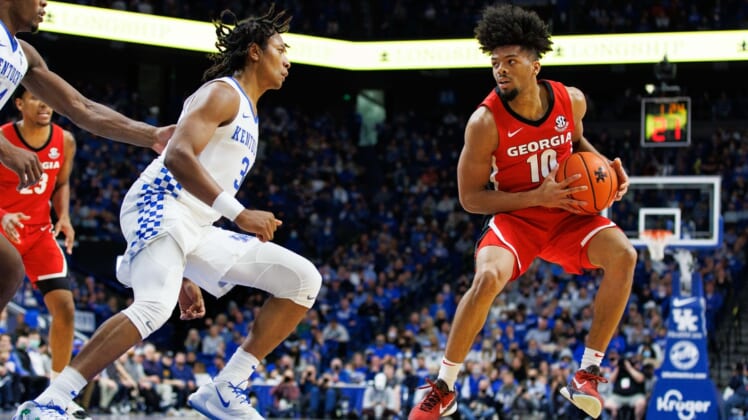 No. 16 Kentucky’s TyTy Washington Jr. made his first career start at point guard and dealt a program-record 17 assists in a 92-77 SEC victory over visiting Georgia on Saturday night in Lexington.

Oscar Tshiebwe had a double-double by halftime and finished with 29 points and 17 rebounds as Kentucky (12-3, 2-1 SEC) rebounded from a Tuesday loss at No. 21 LSU. Washington added 17 points.

Kentucky also got 19 points from Davion Mintz, who hit 5 of 7 shots from beyond the arc as the Wildcats beat the Bulldogs for the 15th time in the last 16 meetings.

Moving from the wing to the point to replace Savhir Wheeler, the nation’s third-leading assist man who was out with a neck injury, Washington topped the Kentucky record of 16 assists set by John Wall in 2009.

With Washington smoothly running the up-tempo offense, the Wildcats continually got high-percentage shots in the second half when it made 22 of 35 (62.9 percent) from the floor. For the game, Kentucky shot 57.1 percent from the floor.

The Wildcats led by just two points early in the second half.

But Kentucky outscored Georgia 13-3 to grab a 57-45 lead. Washington had two buckets in the run and Mintz capped it with a 3-pointer. After that, the closest Georgia got was within eight points.

Georgia got off to a quick start behind Cook, who scored seven straight points in the opening minutes. A 3-pointer by Baumann and a hook shot by Braelen Bridges had the Bulldogs in front 12-6.

Kentucky looked set to take control as it went on a 14-3 run, but Jabri Abdur-Rahim made a 3-pointer and Oquendo followed with a driving three-point play to regain the lead for Georgia, 21-20. That set the scene the rest of the way for a tight half which included five ties and 10 lead changes.