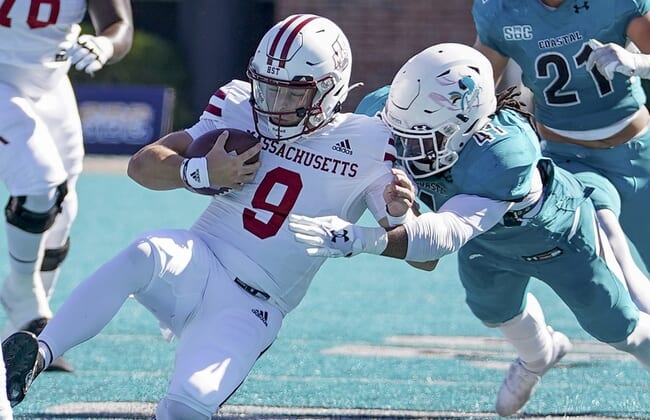 With the first phase of the season complete, No. 16 Coastal Carolina looks to forge ahead in a similar manner as it enters Sun Belt Conference play.

Coastal Carolina (4-0, 0-0 Sun Belt) won three of its first four games via routs. The Sun Belt has been on the rise in recent seasons, so stiffer challenges figure to await the Chanticleers.

Confidence should be growing for the Warhawks, who’ve won consecutive games for the first time since 2018.

“We’ve got to build from this and we’ve got to get better from this,” UL Monroe coach Terry Bowden said.

But there are off-field concerns this week for the Warhawks. Quarterback Rhett Rodriguez, son of offensive coordinator Rich Rodriguez, has been in the hospital with a lung injury sustained in Saturday’s game.

Freshman Chandler Rogers figures to be the starter against Coastal Carolina. He has completed four of his 10 passes this season.

Coastal Carolina is 4-0 for the second year in a row and fifth time overall. The Chanticleers have won 10 straight home games.

Chadwell said the expectation to win games in convincing fashion — like last week against winless Massachusetts — means there has to be a particular emphasis on having the proper focus.

The Chanticleers played the UMass game without running back Shermari Jones because he was dinged up in the previous game with a toe injury. Chadwell said it’s possible that Jones, who leads the team with 96 rushing yards per game, can play this week. Either way, it isn’t expected to be a long-term ailment.

Coastal Carolina is averaging 45.5 points per game. Quarterback Grayson McCall has completed 76.7 percent of his passes with eight touchdown throws and one interception. Jaivon Heiligh leads the Sun Belt with 116 receiving yards per game.

Still, there are areas to shore up on offense.

In two of Coastal Carolina’s victories, there have been ample spots to tap into depth for snaps for backups.

“You hope that helps you down the line if you really need it,” Chadwell said.

While UL Monroe hasn’t sustained much success in recent seasons, the Chanticleers understand how teams can produce turnarounds. Coastal Carolina is a good example of that.

“A lot of those things we’ve built along the way came from the struggles we went through,” Kelly said.

UL Monroe has linebacker Ja’Cquez Williams, a transfer from Wake Forest, as among its playmakers. He returned an interception 96 yards for a touchdown in the Troy game and was voted the Sun Belt Defensive Player of the Week.

The Warhawks are a league-best plus-6 in turnover margin.