No. 14 Utah looking to bounce back at Colorado 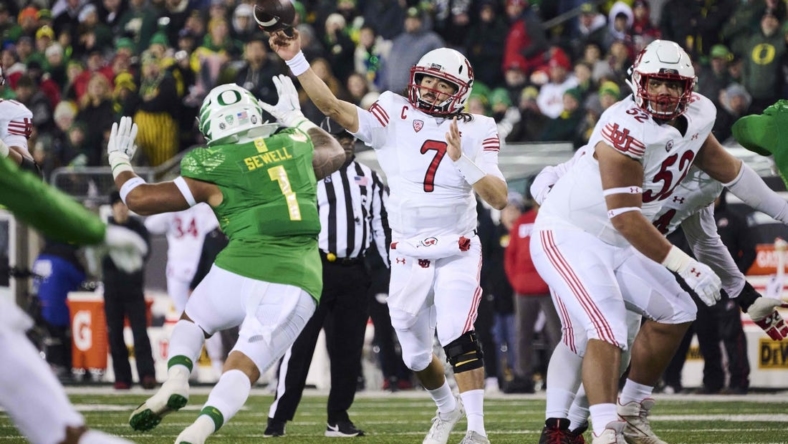 No. 14 Utah will close out the regular season at Colorado on Saturday while keeping an eye on the out-of-town scoreboard.

The Utes (8-3, 6-2 Pac-12) have an outside shot at returning to Las Vegas for the conference championship game next week and a rematch against Southern California, but it will take a group effort.

The 20-17 loss to Oregon last week put the Utes in a position where help is needed to defend their Pac-12 title. If UCLA beats Cal on Friday, Oregon State beats Oregon on Saturday and Washington beats Washington State on Saturday, the Utes, Ducks and Huskies would finish in a tie for second place with a 7-2 record.

After a series of tiebreakers, the Utes could claim the last spot in the title game based on the strength of schedule of common opponents.

To make that scenario even possible, Utah must beat Colorado (1-10, 1-7), which is finishing up a disappointing season under interim head coach Mike Sanford. The Buffaloes could have helped the Utes last week but lost to the Huskies 54-7.

Utah quarterback Cam Rising would love nothing more than to erase the loss to the Ducks. Rising threw three interceptions against Oregon, and although he has a year of eligibility left, he took part in senior night Nov. 12, an indication he could declare for the NFL draft.

His teammates aren’t blaming Rising for the loss to the Ducks.

“Maybe us as receivers could have made more plays and made it easier for him,” receiver Devaughn Vele said. “The running backs could have hit the holes harder or the O-line could have blocked better. It’s a team sport. To put it all on him is kind of unfair. I view it as I need to worry about my 20 square feet. He’s going to do the same. I trust in him that he’ll do his job and I’ll do my job.”

The Buffaloes are a good candidate to restore Rising’s mojo. Colorado has allowed 38 or more points in each of its 10 losses and has given up 109 in the last two weeks. The Buffaloes are last in points allowed in the Football Bowl Subdivision at 42.6 per game.

The news around Boulder, Colo., isn’t so much about the last game of the season but who could be leading the program next year. Sanford took over for the fired Karl Dorrell and has gone 1-5 since, and he is a candidate for the permanent job.

However, a report from 247Sports.com on Monday said that Jackson State head coach Deion Sanders has been linked to talks with the Buffaloes and South Florida.

A few Colorado players expressed support for Sanders on social media, but the NFL Hall of Famer isn’t going to do any campaigning for the job just yet.

“I don’t want anything to do with that, to be honest,” Sanders said. “I’ve kind of seen that deal before where it goes that direction where there’s people that are politicking and working and lobbying and stuff like that. And to me, that’s doing stuff that I don’t think is appropriate.”