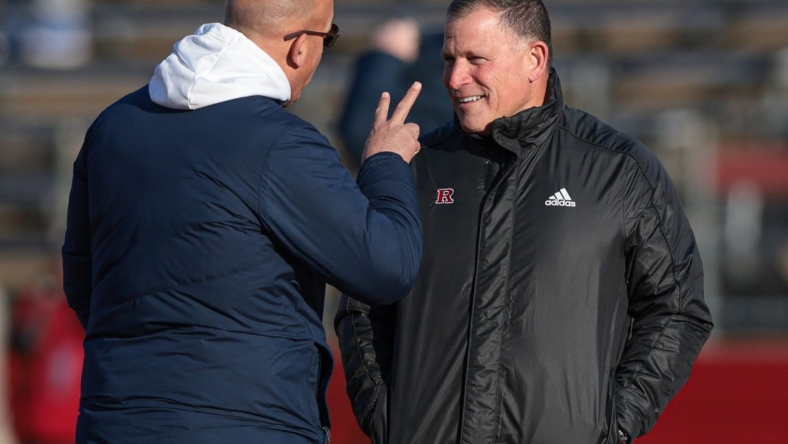 Kobe King and Ji’Ayir Brown scored touchdowns off fumble recoveries and No. 11 Penn State scored 48 unanswered points and rolled to a 55-10 victory over host Rutgers on Saturday in Piscataway, N.J.

Penn State (9-2, 6-2 Big Ten) won its third straight as its defense continued to dominate, getting 15 tackles for loss and four sacks en route to its 16th straight win over Rutgers and 31st in 33 all-time meetings.

The Nittany Lions have 17 sacks during their winning streak.

The first fumble occurred late in the first quarter after Penn State trailed 10-7. On second-and-11, cornerback Marquis Wilson jarred the ball loose from wideout Johnny Langan, allowing King to easily recover and score from 14 yards out for a 14-10 lead.

The second fumble occurred in the opening minute of the second half on third-and-10. With Rutgers in the red zone, quarterback Gavin Wimsatt was strip-sacked and Brown easily recovered and scored from 70 yards out to make it 35-10.

Kaytron Allen ran 11 times for 117 yards, including a 59-yard gain that set up his 8-yard TD run in the third quarter as the Nittany Lions outgained Rutgers 237-32 on the ground.

Sean Clifford completed 17-of-26 passes for 157 yards, including a 10-yard TD to Tyler Warren. He also had a 14-yard rushing TD late in the first half. Backup quarterback Drew Allar played the second half and also scored on a 1-yard TD in the fourth.

After Singleton’s kickoff return with 7:54 remaining, Aron Cruickshank set up Jones’ 4-yard TD with a 67-yard kickoff return but Penn State responded for a 14-10 lead on King’s fumble recovery in the final minute of the first.

The Nittany Lions held a 28-10 lead by halftime after Clifford found Warren and scored on a 14-yard run with 63 seconds remaining.