No. 1 UNC strolls to opening win over UNC Wilmington 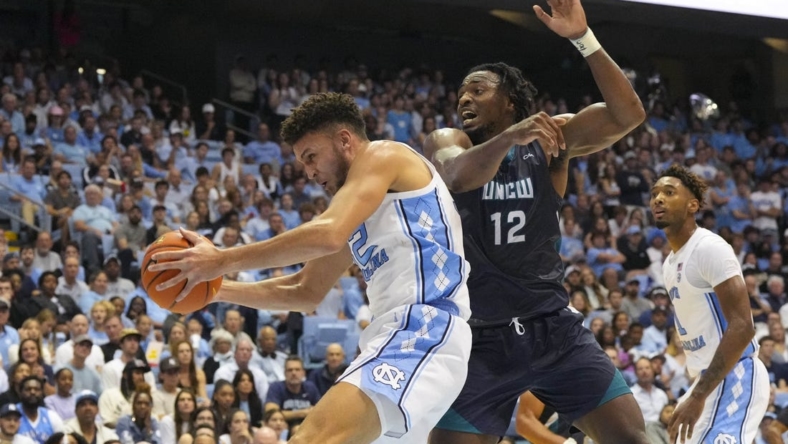 Caleb Love and RJ Davis each scored 17 points as No. 1 North Carolina powered to a season-opening 69-56 victory over visiting UNC Wilmington on Monday night in Chapel Hill, N.C.

Love shot 6-for-12 and Davis shot 6-for-11 from the floor for last season’s national title runners-up. Love also had three rebounds and two steals, while Davis added four rebounds.

The Seahawks were led by Trazarien White’s 19 points. Shykeim Phillips added 11 points, and Donovan Newby had 10.

UNC Wilmington opened the game with an 8-2 lead inside the Dean E. Smith Center. Then the Tar Heels went on a 13-5 run, powered by seven points from Davis.

Later in the half, North Carolina used a 12-2 run to break a tie and take a 29-19 lead. Bacot was the star of that stretch, notching four points, two offensive boards and an assist.

The Tar Heels’ largest lead of the night was 16 points. That came in the second half, following a 10-5 run in which Love had a steal, a rebound and five points.

In his North Carolina debut, Pete Nance, a graduate transfer from Northwestern, had six points, three rebounds and two assists.

North Carolina won despite shooting just 2-for-10 from 3-point range. Last season, the Tar Heels had just two games in which they made fewer than five shots from behind the arc, and they were both losses — a regular-season defeat to Kentucky and an ACC tournament loss to Virginia Tech.

The Tar Heels also committed nine turnovers while logging just four assists. It was the least amount of assists North Carolina registered in a single game in at least a decade.