NIL decision is a huge win for athletes, and college football’s competitive balance

Profiting off name, image and likeness has been forbidden for college athletes, but the NCAA’s recent approval of it, while long overdue, will only enhance college football’s overall product.

That’s right, the NIL decision is actually going to create more parity on the NCAA gridiron.

Why is that? Well, there are several reasons that being able to profit off of college stardom will make football all the more exciting. Let’s take a look at some of the probable ramifications.

Early entrees into the NFL Draft are setting new records seemingly every year, and while that’ll lead some of the bigger stars of college football to perhaps leave school earlier than they otherwise would, the NIL decision will incentivize those with lesser NFL prospects to stay in college.

Elite players who enter the draft quickly are expecting to be picked high anyway. Someone like Trevor Lawrence, if he were allowed, could’ve been a first-round quarterback if he were allowed the draft after his true freshman season. Instead, he waited the required three years, starred at Clemson, and was ultimately the No. 1 overall pick.

One problem with the pre-NIL decision model, though, was that others would force the issue as premature draft entrants due to the need for financial gain. 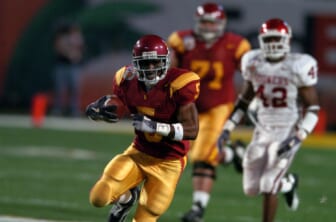 Now, those prospects who’d probably have to wait until Day 3 to hear their name called can avoid rushing to the pros, refine their skills at the collegiate level and still make some decent money while boosting their draft stock for the next year.

Granted, the risk of injury still hangs over football players’ heads all the time. Leaping to the pros as soon as possible will still be viewed as the best route for many, especially potential first-round picks.

Having said that, with the extra money NIL profits will bring, you can bet players will be more inclined to purchase insurance policies to guard against potential injuries. You can imagine it’ll be easier to make down payments on those with an endorsement revenue stream to supplement scholarships and stipend checks.

Coaching diversity should expand across the country after NIL decision

This probably seems like something of a logical stretch on the surface until you really start to think about it.

Top assistants at, say, Alabama or Ohio State will have less incentive to stick around those powerhouse programs. They’ll want a shot at a head coaching job that pays more, and the chance to establish themselves as the leader at another school, to then possibly create a path to an even better coaching job later on.

To clarify, this is conjecture, yet it’s not hard to connect the dots here. Because of the scenario outlined above, top assistant coaching mobility should increase, and a higher turnover rate at the most prestigious football schools should follow.

It’s the worst-kept secret in football, both at the college and NFL levels, that there’s a lacking presence of minority head coaches and top assistants.

Increased mobility will inevitably lead to diverse candidates getting more opportunities for promotions, and create a healthily competitive, and more meritocratic coaching hierarchy in college football.

At least, that’s the hope. If this trend doesn’t come to pass, it’d be quite a surprise.

Top recruits will be more spread out, leading to parity

Here’s the big kicker: You aren’t going to see every blue-chip prospect coming out of high school deciding between the same handful of top-flight college football programs.

Sure, proven legendary coaches like Alabama’s Nick Saban and others who’ve routinely produced NFL players will still attract their fair share of talent. The class of 2020’s consensus No. 1 quarterback prospect, Bryce Young, is in line to start this coming season after Saban just had two first-round picks at QB in Tua Tagovailoa and Mac Jones.

On the other hand, there’s always so much competition at those elite schools, and unless you’re truly a special player, it’s very hard to get on the field early on. Young could’ve easily started somewhere as a true freshman and made bank under the new NIL rules.

Because of the NIL decision, recruits aren’t going to want to redshirt, or dress for two to three years before they get a crack at significant playing time. They should want to profit off their name, image and likeness as soon as possible once they set foot on campus.

Being purely profit-driven is a dangerous mentality for anyone to have. However, the best part about all this is that 5-star players will be more smitten with the idea of going to either another Power 5 team, or a rising mid-major, and becoming the face of that program.

There are always players who rise up out of nowhere and star in the NFL from less-heralded NCAA teams. What could happen from here on out in that regard, thanks to the NIL decision, could be truly extraordinary.

The spirit of NCAA’s NIL decision is reactive, but the outcome should be glorious

Scenes such as the one where former LSU receiver Odell Beckham Jr. handed out cash to players after the Tigers’ national championship run will no longer be publicly scrutinized, or even necessary.

Look, the NCAA caved to immense public and even political pressure to even budge enough to instate and interim NIL profit policy. The organization has had no problem being exploitative in the past, and you can bet it’ll find a way to install some loopholes in the finalized NIL jargon.

Who cares? At this point, the watershed moment has happened, the precedent has been established, and there’s no turning back.

Everything will continue to trend toward helping student-athletes — particularly in college football, since the sport easily brings in the most money to athletic departments at the vast majority of schools.

Students being rewarded and more financially secure for their hard-earned glory on the football field. Better coaching and greater opportunities to diversify the ranks. Parity induced by recruits who covet early playing time.

Hard to see much downside here.