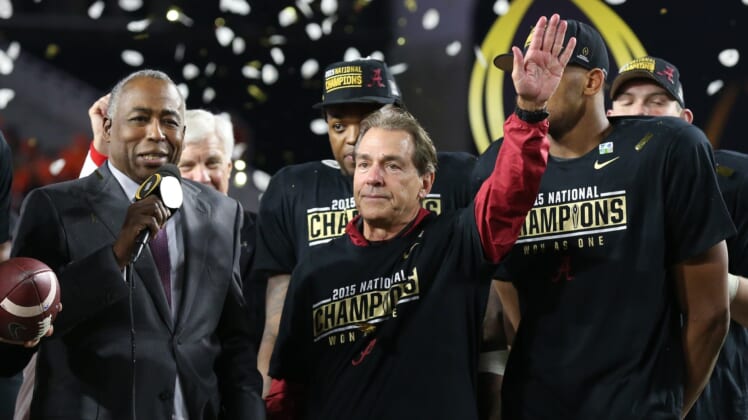 Alabama football head coach Nick Saban used to coach LSU. During his time with the Tigers he tried to recruit Michael Oher, subject of The Blind Side.

Saban related some hilarious anecdotes from that movie, which he appeared in, during his Thursday radio show. It was a live show in which fans were able to ask the coach questions, and Saban made it clear that he had some demands before he’d appear in the movie.

Saban almost didn’t appear in the movie at all.

In the end, he appeared in the movie only after making it clear he wouldn’t wear LSU clothing.

“So I refused and Fred Smith, who was a pretty powerful guy with FedEx and all that, produced the movie and talked me into doing it. I told him I’d do it, but I’m not going to wear LSU clothes. He said ok. Then the director comes in and gives me a script and says ‘Ok, here’s your lines. Here’s what we want you to say.’ I said, ‘Hey buddy, I was there. I did this.’”

At this point, the crowd burst into laughter. Saban continued to relate the story, showing just how influential he is.

“In my opinion, there was no acting at all,” Saban said, smiling. “To me if you act, they give you a script and you act like somebody else. All I did was just be myself and did exactly what I did. Coaching the team’s harder, I guess is what I’m trying to say.”

At least we know Saban isn’t devoid of passion. And it’s pretty cool how he was thinking about how Alabama fans might react to him wearing an LSU outfit. Just don’t ask him if he cares about a once-in-a-lifetime eclipse.

Alabama and LSU are staunch rivals. Saban’s crew will get a crack at their SEC foes on November 4, in Baton Rouge.