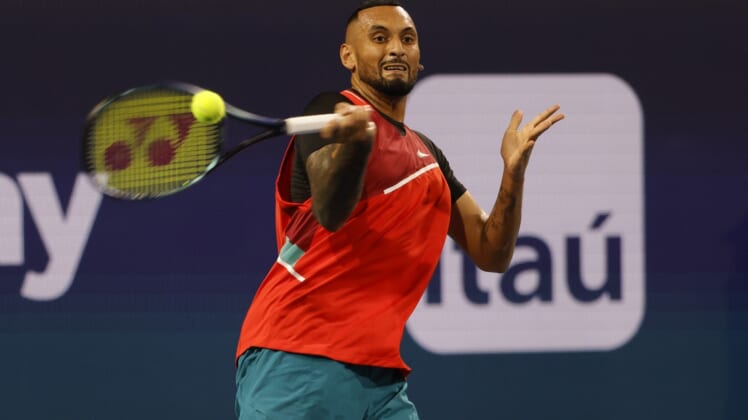 Nick Kyrgios beat a top-10-ranked player for the third time in his past two tournaments, defeating fifth-seeded Andrey Rublev of Russia 6-3, 6-0 on Friday in the second round of the Miami Open.

The wild-card entrant from Australia is ranked 102nd in the world, but he is coming off a run to the quarterfinals at Indian Wells, Calif., in which he beat then-No. 8 Casper Ruud of Norway and then-No. 10 Jannik Sinner of Italy before falling to then-No. 4 Rafael Nadal of Spain.

Kyrgios needed just 52 minutes to finish of Rublev, as he fired 10 aces without a double fault. Kyrgios lost his second just once — to fall behind 2-1 in the first set — but he converted five of his seven break points.

“He came out hot at the start and that’s tennis,” Kyrgios said of Rublev. “A couple points could swing a momentum change like that, and once I got that double break, I started seeing the return really well.

Next up for Kyrgios is a third-round match against 31st-seeded Fabio Fognini of Italy. Fognini eked out a 6-7 (1), 6-2, 7-6 (5) victory over Japanese qualifier Taro Daniel, who was serving for the match at 6-5 in the third set but couldn’t close it out.

“It was a tough match today,” Sinner told ATPTour.com. “I was a little bit lucky, because 7-6 in the third you need some luck, also. I think he played very well, especially from the second set on. I tried to deal with the conditions, I tried to fight with what I had today and I am very happy about the win.”