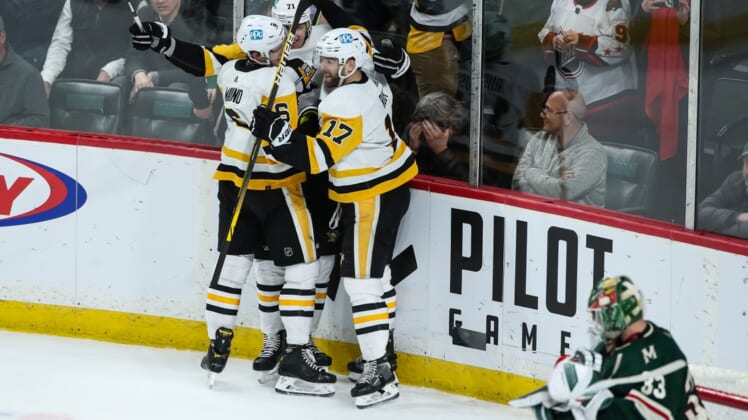 Evgeni Malkin scored the winning goal and Rickard Rakell tallied twice to lead the visiting Pittsburgh Penguins to a 4-3 overtime victory over the Minnesota Wild on Thursday in Saint Paul, Minn.

Jake Guentzel also scored and goaltender Casey DeSmith made 28 saves for the Penguins, who blew a two-goal lead.

Matt Dumba, Frederick Gaudreau and Krill Kaprizov replied for the Wild, who saw their seven-game winning streak end and lost a game decided in overtime for the first time this season (7-1). Cam Talbot stopped 35 shots.

Malkin had the presence to bury his own rebound chance 3:57 into overtime for his 17th of the season. Malkin tied Jaromir Jagr for the most winning goals in Penguins history (78).

Lias Andersson scored the shootout winner to give visiting Los Angeles a much-needed victory over Calgary a clash between the Pacific Division’s top two clubs.

Los Angeles goaltender Cal Petersen stopped 26 shots through regulation and overtime and all three Flames attempts in the shootout. Alex Iafallo and Viktor Arvidsson scored for the Kings, who pulled within five points of the Flames in the chase for the top spot in the division.

Johnny Gaudreau and Erik Gudbranson replied for Calgary, which has three games in hand on Los Angeles. Jacob Markstrom stopped 30 shots, including six during the overtime period. The Flames didn’t put a shot on net in OT.

Patrice Bergeron added a goal and two assists and David Pastrnak dished out three assists to help Boston earn its fifth win in six games. Matt Grzelcyk and Jake DeBrusk each logged a goal and an assist, Massachusetts native Marc McLaughlin scored in his NHL debut, and Erik Haula and Taylor Hall also found the net for Boston. Linus Ullmark made 25 saves.

Jamie Benn scored on a breakaway 53 seconds into overtime and visiting Dallas continued its late-season playoff push with a victory over Anaheim.

Ryan Suter and Andrej Sekera also scored goals for the Stars, while Jake Oettinger wound up with 21 saves after facing just five Anaheim shots through the midway point of the game.

Jamie Drysdale and Kevin Shattenkirk each had a goal for the Ducks, while John Gibson made 32 saves as Anaheim’s losing streak reached 11 games (0-8-3). The Ducks lost to the Stars for the second time in three days by the same 3-2 score.

Matthews scored into an empty net at 17:54 of the third period on a pass from Mitchell Marner to become the fourth Maple Leaf to record 50 goals in a season in franchise history. Ilya Mikheyev scored a short-handed goal and added two assists for the Maple Leafs, who have won three in a row.

Nikolaj Ehlers had a goal and an assist for Winnipeg. Blake Wheeler and Paul Stastny also scored for the Jets, who had a three-game winning streak end. Mark Scheifele added two assists.

Aleksander Barkov scored twice and Sergei Bobrovsky posted 37 saves for his third shutout of the season as Florida defeated Chicago in Sunrise, Fla.

Florida’s Jonathan Huberdeau dished his 71st assist, the most in NHL history by a left winger. The previous record was 70, set by the Boston Bruins’ Joe Juneau in 1992-93.

Ryan Lomberg and Gustav Forsling also scored for the Panthers. Collin Delia made 40 saves for the Blackhawks, who have lost three consecutive games (0-2-1).

Nazem Kadri and Erik Johnson had two assists each and Pavel Francouz made 25 saves for the Avalanche, who got Nathan MacKinnon back after he missed a game with an upper-body injury. The Avalanche improved to 7-1-1 in their past nine games.

Brent Burns and Timo Meier scored goals, Tomas Hertl had two assists and Kaapo Kahkonen stopped 42 shots for the Sharks, who lost for the third time in four games.

Kyle Palmieri, Mathew Barzal and Ryan Pulock scored in the third period for the New York, which completed a home-and-home sweep of Columbus with a win in Elmont, N.Y.

Sebastian Aho and Oliver Wahlstrom scored 11 seconds apart in the first for the Islanders, who beat the Blue Jackets 4-3 in Ohio on Tuesday. Semyon Varlamov earned the win Thursday by making 30 saves, helping the Islanders improve to 10-4-1 in their past 15 games.

Carolina took an early lead and rode Frederik Andersen’s 32-save performance to shut out Montreal at Raleigh, N.C.

Andrei Svechnikov notched two goals, the second going into an empty net. Sebastian Aho scored on a power play just 3:48 into the game and Teuvo Teravainen also produced a goal for Carolina, which has won three of its past four games.