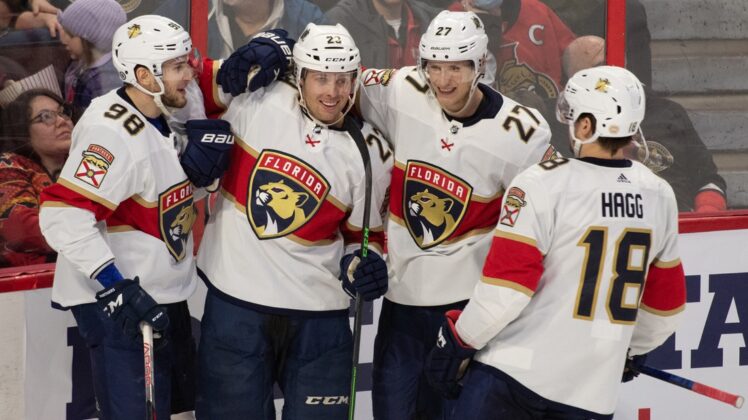 Spencer Knight made 27 saves for the visiting Panthers in a 4-0 win against the Ottawa Senators on Thursday night, and Florida later clinched the Presidents’ Trophy.

Carter Verhaeghe scored two goals while Sam Reinhart and Sam Bennett each had a goal and an assist for the Panthers, who had already wrapped up first place in the Atlantic Division and the No. 1 seed from the Eastern Conference playoffs.

Later Thursday, when the Colorado Avalanche lost in a shootout to the visiting Nashville Predators, the Panthers sealed the first Presidents’ Trophy in the franchise’s 28-year history.

Filip Gustavsson made 26 saves for the Senators, who had won a season-high four straight games.

Dustin Tokarski made 27 saves for the Sabres, who had their four-game winning streak snapped.

Matt Duchene scored in regulation and added the only goal in the shootout as Nashville beat Colorado in Denver.

Mattias Ekholm and Roman Josi had a goal and an assist each, Ryan Johansen also scored, Mikael Granlund had two assists and David Rittich stopped 42 shots for Nashville. The Predators moved a point ahead of the Dallas Stars for the first wild card in the Western Conference.

Cale Makar, J.T. Compher, Artturi Lehkonen and Logan O’Connor scored goals and Darcy Kuemper made 33 saves for the Avalanche. Colorado lost the race for the Presidents’ Trophy but set a franchise high for points in a season.

Jesperi Kotkaniemi provided a goal and two assists in his return from an injury-related absence and Carolina used a makeshift lineup to conclude the regular season in style by defeating New Jersey in Raleigh, N.C.

The Devils lost their fifth game in a row (0-3-2) despite goals from Fabian Zetterlund, Jesper Bratt and Jimmy Vesey and two assists from Pavel Zacha.

Oliver Bjorkstrand had a goal with an assist and Elvis Merzlikins made 25 saves as Columbus cooled off visiting Tampa Bay.

Jack Roslovic recorded his 22nd goal while Jakub Voracek and Cole Sillinger also scored and Andrew Peeke added an empty-netter for the Blue Jackets, who have won two of three following an 0-3-1 rut.

Facing a Tampa Bay squad that totaled 26 goals to win its previous four contests and is trying to maintain third place in the Atlantic Division, Columbus killed five of the visitors’ seven power-play chances and got a solid effort from Merzlikins in its home finale.

Jean Gabriel-Pageau and Josh Bailey also scored for the Islanders, who beat the Capitals 4-1 in the opener of a home-and-home set Tuesday. Varlamov made 26 saves.

Axel Jonsson-Fjallby scored with 41.4 seconds left and Vitek Vanecek recorded 21 saves for the Capitals, who have lost three straight (0-2-1) and four of five (1-2-2). Washington was without star left winger Alex Ovechkin, who missed a second straight game with an upper-body injury.

Zach Hyman scored the overtime winner to give host Edmonton a comeback victory over San Jose, allowing the Oilers to seal second place in the Pacific Division.

Ryan McLeod, Kailer Yamamoto, Derek Ryan and Philip Broberg also scored for the Oilers, who will face the Los Angeles Kings in the opening round of the playoffs. Mikko Koskinen made 40 saves for Edmonton, which has a 13-0-1 record in its past 14 home games.

Kirill Kaprizov scored in overtime to give Minnesota the victory over Calgary in Saint Paul, Minn., and a firmer hold on second place in the Central Division.

Frederick Gaudreau had a goal and an assist and Jonas Brodin also scored for the Wild. Cam Talbot made 31 saves for the win. The Wild have a two-point edge on the St. Louis Blues, with home-ice advantage up for grabs in their pending Stanley Cup playoff series.

Johnny Gaudreau, with his 40th goal of the season, and Elias Lindholm scored for the Pacific Division-champion Flames. Gaudreau also had an assist, Nikita Zadorov contributed two assists and Jacob Markstrom stopped 22 shots.

Brock Boeser scored his second goal of the game with 30 seconds left in overtime to lift Vancouver to a win over visiting Los Angeles.

Alex Chiasson also scored and Spencer Martin made 33 saves for the Canucks, who overcame a 2-0 deficit after two periods. Vancouver had lost three of its previous four to fall out of playoff contention.

Gabriel Vilardi and Adrian Kempe scored and Cal Petersen made 26 saves in the regular-season finale for the Kings. Los Angeles forward Dustin Brown, a two-time Stanley Cup Champion with and the Kings’ all-time leader in regular-season games played, appeared in his final regular-season game after announcing earlier Thursday that he was retiring.