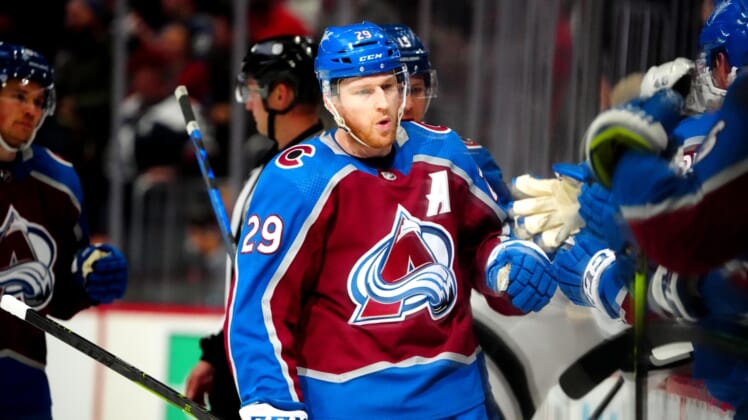 Nathan MacKinnon finished with three goals and two assists for the Colorado Avalanche, who set a franchise record for wins in a season by clobbering the Los Angeles Kings 9-3 on Wednesday in Denver.

Cale Makar had a goal and three assists, Valeri Nichushkin and Nicolas Aube-Kubel each scored twice and Darcy Kuemper made 29 saves for the Avalanche, who have 53 wins and lead the league with 112 points. Colorado earned its seventh consecutive victory.

Adrian Kempe, Alex Iafallo and Phillip Danault scored for Los Angeles, and Jordan Spence had two assists. Jonathan Quick gave up three goals on 10 shots before he was replaced by Cal Petersen midway through the first period.

Petersen finished with 19 saves for the Kings, who remain three points ahead of Vegas for third place in the Pacific Division, though the Golden Knights have two games in hand.

Artemi Panarin and Andrew Copp also scored for the Rangers, who sit two points behind the Metropolitan Division-leading Hurricanes. Carolina also has one game in hand. Georgiev stopped 28 shots for his second shutout of the season and eighth in his career.

Felix Sandstrom made 30 saves for the Flyers, who have lost four of five games. It’s only the second time in franchise history the Flyers have posted 40 regulation-time losses. The other time was 2006-07.

Columbus’ Emil Bemstrom and Cole Sillinger each added a goal and an assist, and Gustav Nyquist and Jakub Voracek had two assists apiece. Elvis Merzlikins made 20 saves for the Blue Jackets, who have won three out of four.

Ryan Poehling scored and Sam Montembeault made 26 saves for the Canadiens, who have lost three in a row.