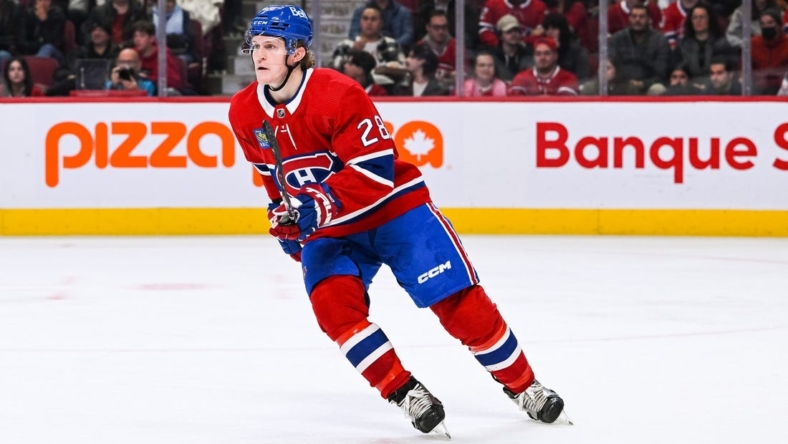 Cole Caufield scored twice, Nick Suzuki added a goal and two assists and Juraj Slafkovsky also scored for the Canadiens, who erased a 3-1 deficit while winning for the fourth time in six games.

Winning goaltender Jake Allen made 26 saves and earned an assist.

Jordan Kyrou scored twice for the Blues, who lost their fourth straight game. Noel Acciari and Vladimir Tarasenko also scored, and Brayden Schenn and Justin Faulk had two assists each.

Nikita Kucherov chipped in the tiebreaking goal just inside the final minute as Tampa Bay wrapped up its three-game California road trip with a win over host San Jose.

Alex Killorn had a goal and an assist, and Victor Hedman and Ross Colton scored. Brayden Point and Hagel had two assists apiece. Andrei Vasilevskiy moved to 3-3-0 with 24 saves as the Lightning went 2-1-0 on their trip.

San Jose’s Erik Karlsson tallied at even strength and on the power play, and Nico Sturm scored. Tomas Hertl had two assists, while James Reimer made 22 saves.

Zac Jones scored the tiebreaking goal in the third period to help New York notch a victory over host Dallas.

Vincent Trocheck scored twice and added an assist for the Rangers, who snapped a four-game losing streak. Chris Kreider, Mika Zibanejad (two assists) and Julien Gauthier also had goals for New York. Igor Shesterkin made 30 saves for the Rangers.

Mason Marchment, Roope Hintz and Jason Robertson lit the lamp for the Stars, who have dropped three of their last four games. Jake Oettinger gave up two goals on 10 shots before exiting with a lower-body injury. Scott Wedgewood allowed four goals on 17 shots.

Brandon Montour, Aleksander Barkov and Matthew Tkachuk each had a goal and two assists in Florida’s win over visiting Ottawa.

Carter Verhaeghe scored the other two goals, and Spencer Knight made 23 saves for the Panthers, who ended a two-game losing streak.

Nick Holden had a goal and an assist, and Shane Pinto and Brady Tkachuk also scored for the Senators, who have lost two in a row following a four-game win streak. Anton Forsberg made a career-high 53 saves.

Kevin Fiala had a goal and an assist for Los Angeles in a win against visiting Toronto.

John Tavares and Pierre Engvall scored, and Ilya Samsonov made 25 saves for the Maple Leafs, who have lost three in a row.

Lucas Raymond scored his first two goals of the season and host Detroit downed the Wild.

Raymond was one of the league’s top rookies last season, when he collected 23 goals and 57 points. He was mired in a scoring slump in the early going this season but broke through with the aid of Dylan Larkin, who assisted on both goals.

Minnesota was limited to Kirill Kaprizov’s sixth goal this season. The Wild were playing their fourth game during a five-game road trip and had notched five of a possible six points prior to Saturday’s outing.

Jordan Staal and Martin Necas each added one goal and one assist for the Hurricanes. Jordan Martinook also scored.

Carolina goaltender Antti Raanta made 26 saves. Wade Allison and Nic Deslauriers each had one goal and one assist for the Flyers.Owen Tippett contributed one goal, and Lukas Sedlak chipped in with two assists.

Victor Olofsson capped a two-goal performance by scoring 36 seconds into overtime to propel host Buffalo to a victory over Chicago.

Tage Thompson scored twice in the third period before picking up an assist on Olofsson’s winner. Olofsson converted a pass from defenseman Rasmus Dahlin past Arvid Soderblom (41 saves) as Buffalo snapped a modest two-game losing streak.

Chicago’s Jason Dickinson scored a power-play goal in the first period and Sam Lafferty and Taylor Raddysh tallied in the second for the Blackhawks. Buffalo native Patrick Kane played in his 1,115th career game to move into third place all-time in franchise history.

Scott Mayfield and Anthony Beauvillier scored the tying and go-ahead goals in a 17-second span just beyond the midway point of the third period for host New York, which overcame a three-goal deficit to stun Colorado in Elmont, N.Y.

The Islanders peppered Alexandar Georgiev before Mathew Barzal’s shot into the crease glanced off Mayfield’s stick for the tying goal with 9:21 left. Anders Lee forced a turnover in the neutral zone and dished to Beauvillier, who beat Georgiev on a semi-breakaway.

Noah Dobson scored in the second, Zach Parise scored early in the third and Brock Nelson added an empty-netter that proved to be the game-winner with 1:21 left for the Islanders, who have won three straight, all against teams that qualified for the postseason in 2021-22.

Darcy Kuemper made 34 saves for his first shutout of the season and visiting Washington defeated Nashville.

Beck Malenstyn and Aliaksei Protas scored for Washington, which was coming off a 2-0 shutout loss at Dallas on Thursday. Alex Ovechkin added his 49th career empty-net tally, and Kuemper earned his 26th career shutout.

Juuse Saros made 32 saves for the Predators, who were blanked for the first time this season after scoring six goals in a Thursday win against the St. Louis Blues.