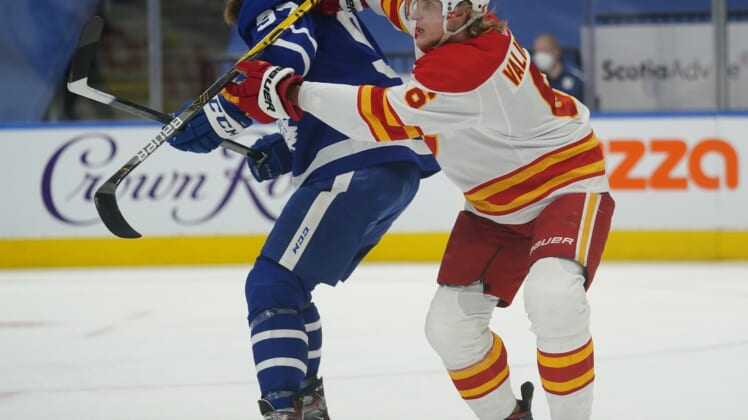 Johnny Gaudreau scored 36 seconds into overtime to give the visiting Calgary Flames a 3-2 victory over the Toronto Maple Leafs on Tuesday.

Following a 1-8-0 stretch, the Flames have now won consecutive games. The win moves Calgary six points behind the Montreal Canadiens for the fourth and final North Division playoff berth.

Toronto lost for the second consecutive night, after dropping a 4-2 result in Montreal on Monday. The Leafs are 9-1-2 over their last 12 games.

Mika Zibanejad scored in the first period, Artemi Panarin tallied in the third and Igor Shesterkin made 27 saves for his first career shutout, and visiting New York beat New Jersey.

The Rangers began a stretch of four straight games against the Devils by improving to 10-4-4 in their past 18 games. New York entered Tuesday four points behind the Boston Bruins for the fourth and final playoff spot in the East Division.

Newly acquired forward Anthony Mantha finished with a goal and an assist as Washington started quickly and defeated visiting Philadelphia.

Mantha, who finished with a team-high six shots, recorded his assist during the four-goal first period that helped Washington take command. His goal came in the second period on a blistering shot that beat Philadelphia goalie Brian Elliott.

Conor Sheary added a goal and two assists for Washington while Backstrom, Alex Ovechkin and Tom Wilson each recorded a goal and an assist. Carl Hagelin scored the other Caps’ goal.

Charlie Coyle and Jake DeBrusk scored in a shootout to push new-look Boston past visiting Buffalo to end a two-game losing streak.

Craig Smith had a goal and an assist, and David Krejci also scored for the Bruins. Jeremy Swayman had 21 saves and turned away both Buffalo chances in the shootout.

Rasmus Dahlin and Colin Miller scored for the Sabres, who have dropped three of four (1-2-1). Dustin Tokarski stopped 29 shots in relief of Linus Ullmark, who exited early in the first period with an undisclosed injury.

There were just six seconds left on the power play when Vatrano scored off a pass from Gustav Forsling. The Panthers, who also got goals from Aleksander Barkov and Radko Gudas, snapped their season-high-tying three-game losing streak. Chris Driedger made 24 saves.

Dallas got goals from Jason Robertson and Joe Pavelski. Robertson, a Rookie of the Year candidate, scored his 12th goal of the season and his fourth in his past four games. Pavelski scored his team-high 16th goal. Anton Khudobin made 28 saves.

Rocco Grimaldi, Colton Sissons, Tanner Jeannot and Mikael Granlund also scored for the Predators, who received a 21-save performance from goaltender Juuse Saros to beat the Lightning for only the second time in eight meetings this season.

Grimaldi, Ryan Johansen and Rem Pitlick had two-point outings for Nashville, which has won 13 of 16 games and holds the fourth spot in the Central Division.