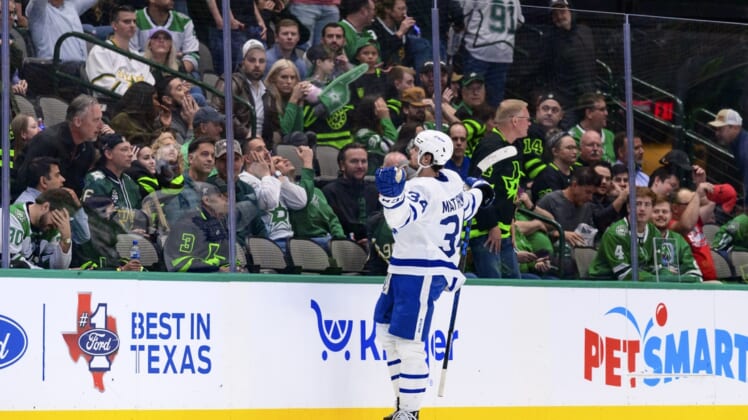 Auston Matthews set Toronto’s single-season goal record in regulation, then scored his 56th of the campaign 2:10 into overtime as the visiting Maple Leafs extended their point streak to a season-high seven with a 4-3 win over the Dallas Stars on Thursday.

Matthews, who recorded a career-high 12 shots on goal, got his milestone 55th score on a power play with 1:02 left in the second period. Amid a career season with 97 points, Matthews broke Rick Vaive’s club mark of 54 goals from 1981-82 and extended his point streak to 15 games.

William Nylander had a goal and an assist and Morgan Rielly also scored for Toronto. Jack Campbell made 15 saves for the win.

Sebastian Aho broke a third-period tie with his second goal of the game, and Carolina clinched a spot in the Stanley Cup playoffs with a comeback win against Buffalo in Raleigh, N.C.

Jordan Staal scored twice, Teuvo Teravainen added a goal and Seth Jarvis and Andrei Svechnikov had two assists apiece for the Hurricanes, who won for the first time in three games. Antti Raanta made 18 saves for the victory.

Tage Thompson and Alex Tuch each had a goal and an assist, Victor Olofsson scored and Jeff Skinner had two assists for the Sabres. Craig Anderson made 27 saves as Buffalo slipped to 8-3-3 in its past 14 games.

Philipp Grubauer made 29 saves for his second shutout of the season and the 20th of his NHL career as Seattle defeated host Chicago.

Alex Wennberg and Jordan Eberle scored for Seattle, which split its two-game trip after a 4-1 loss the previous day in St. Louis.

Kevin Lankinen stopped 29 of 31 shots for the Blackhawks, who took their sixth consecutive defeat and haven’t won on home ice since March 8 — a span of five home games (0-3-2).

Igor Shesterkin stopped all 30 shots he faced and New York rode a two-goal second period to a victory over visiting Pittsburgh.

It was the sixth career shutout, fourth of the season and first against Pittsburgh for Shesterkin, who had lost two straight starts and avoided his first three-game losing skid of the season. Frank Vatrano, Artemi Panarin and Dryden Hunt scored for the Rangers, who won their second straight.

Tristan Jarry made 21 saves for the Penguins, who have lost three in row and six of their past eight (2-5-1).

Chris Wideman, Kale Clague and Christian Dvorak each collected one goal and two assists as Montreal set a season high for goals in a victory at Newark, N.J.

Nick Suzuki and Cole Caufield each scored and set up a goal, Jake Evans and Joel Armia also tallied, and Jake Allen made 33 saves as Montreal posted its first regulation win over New Jersey since a 5-1 victory on Jan. 20, 2017.

Tomas Tatar and Jesper Bratt each recorded a goal and an assist and Ty Smith and A.J. Greer also scored for the Devils, who are winless in their past five games (0-4-1). Andrew Hammond yielded six goals on 19 shots before being relieved by Nico Daws, who stopped six of the seven shots he faced.

Josi has 68 assists to go along with 19 goals for 87 points. He is just the 13th defenseman in NHL history to record 85 or more points in a season. Matt Duchene had a goal and an assist, Tanner Jeannot and Ryan Johansen also scored, and Juuse Saros made 27 saves to tie for the league lead with 35 wins.

Mathieu Joseph and Josh Norris scored for the Senators, who were looking for their first four-game winning streak of the season. Anton Forsberg stopped 31 of 34 shots for Ottawa.

Bo Horvat scored twice in 38 seconds and reached the 30-goal plateau for the first time as part of a three-point night, helping Vancouver earn a win in Glendale, Ariz.

Alex Chiasson scored both of Vancouver’s power-play goals and had an assist. Elias Pettersson added a goal and two helpers, Conor Garland and Vasily Podkolzin each had two assists and Jaroslav Halak made 27 saves.

Arizona got a goal from Nick Schmaltz while falling to 2-8-1 in its past 11 games. In his first NHL appearance since 2018, goalie Harri Sateri made his Coyotes debut and saved 27 of 32 shots.

Trevor Lewis also scored for the Flames, who have won three straight games and have a six-point lead on the Edmonton Oilers in the race for the division crown. Dan Vladar made 31 saves.

Nick Bonino and Logan Couture replied for the Sharks, who are winless in their past five games and have just three victories in their last 12 (3-7-2). James Reimer stopped 32 of 35 shots before being injured midway through the third period. Kappo Kahkonen made five saves in relief.

Connor McDavid got Edmonton started with a goal just over three minutes into the game in an eventual win over host Los Angeles that solidified the Oilers’ hold on second place in the Pacific Division.

Evan Bouchard collected a goal and two assists, McDavid had a two-point night and Warren Foegele also scored as the Oilers extended their winning streak to six games. Mike Smith made 31 saves.

Trevor Moore had a goal and an assist, Viktor Arvidsson also tallied and Jonathan Quick made 27 saves as Los Angeles missed out on a chance to retake second place from Edmonton. The Kings lost their second consecutive game and are 2-3-1 over their past six.