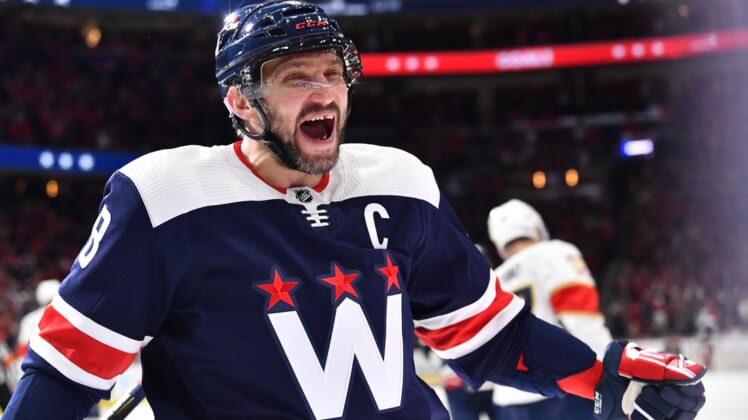 Alex Ovechkin capped his 28th career hat trick by scoring 4:02 into the third period to lead the host Washington Capitals to a 4-3 win over the Florida Panthers on Friday night.

Ovechkin, who upped his season total to 18 goals, scored on the left side on a rebound, from the right circle on the rush and in the slot. He has 273 career power-play goals, one shy of Dave Andreychuk’s NHL record.

Tom Wilson collected one goal and two assists and Evgeny Kuznetsov set up three tallies for the Capitals. Florida was leading 1-0 early in the second period before the Capitals scored three goals in 2:12.

Artemi Panarin scored the go-ahead goal with 8:25 to play in the third period and added an assist to help lead New York past host Boston.

Panarin tipped in Julien Gauthier’s pass from the right circle while skating through the crease. New York’s Alexis Lafreniere finished off a 2-for-1 with a wrist shot from the left circle with under four minutes to go to seal the result.

Ryan Strome, Dryden Hart and Jacob Trouba (empty-netter) each added one goal for New York, which has won three straight games and seven of its last eight overall. Boston lost for the second time in three games after winning four of its previous five.

DeBrincat took a pass from Patrick Kane on a two-on-one and put a one-timer from the bottom of the left faceoff circle past Blues goaltender Jordan Binnington. Jujhar Khaira and Brandon Hagel also scored for the Blackhawks and goalie Kevin Lankinen made 23 saves. Chicago improved to 4-0-0 at home under interim coach Derek King.

Pavel Buchnevich had a goal and an assist and Ivan Barbashev also scored for St. Louis. Binnington stopped 24 of 27 shots but the Blues had a franchise-record, five-game winning streak in the series snapped.

Jake Oettinger stopped 32 shots, 19 in the third period, after missing the last 7:22 of the second period following a hit to the head.

Cale Makar scored a goal for the fifth straight game and Darcy Kuemper made 19 saves for Colorado, which had its six-game winning streak snapped. Nazem Kadri saw his 10-game point streak end.

Tristan Jarry stopped all 25 shots he faced and Kasperi Kapanen scored the game’s only goal as Pittsburgh edged skidding and undermanned New York in Elmont, N.Y.

The shutout was the third in 17 starts this season for Jarry, tying the career high he set in 31 starts in 2019-20. The Penguins have won five straight.

Goalie Ilya Sorokin recorded 29 saves, including a pair on breakaway attempts in the third period, but it wasn’t enough as the Islanders completed a 0-4-0 first homestand at UBS Arena. New York has dropped eight in a row overall.

Vasilevskiy stopped 34 shots Tuesday night in a 4-0 home win over the Philadelphia Flyers and was solid again in the Kraken’s first appearance bayside. The Russian netminder had a light night as he faced just 17 shots to improve his career mark to 200-86-22 overall with 28 shutouts.

Pierre-Edouard Bellemare — a defensive-oriented forward who excels in faceoffs and on the penalty kill — notched his first marker for the Lightning. Ross Colton and Steven Stamkos netted for the Lightning, who won their third straight and are 6-1-0 in their past seven games.

Jesperi Kotkaniemi added one goal and one assist and Antti Raanta made 20 saves for the Hurricanes, who snapped a two-game losing streak (0-1-1). Andrei Svechnikov, Jesper Fast and Steven Lorentz each contributed one goal while defenseman Tony DeAngelo had two assists.

Joel Farabee and defensemen Ivan Provorov and Rasmus Ristolainen each scored one goal and Carter Hart made 30 saves for the reeling Flyers, who have dropped five in a row (0-3-2).

Cody Eakin had a goal and an assist and Kyle Okposo also scored for Buffalo, which snapped a four-game losing streak. Jeff Skinner and Victor Olofsson each added two assists. Tokarski, pulled early in each of his two previous starts, improved his record at 4-4-2 for the season.

Josh Anderson scored for the Canadiens, who fell to 1-9-1 away from Montreal this season, the worst road mark in the NHL. Sam Montembeault finished with 35 saves.

Kirill Kaprizov netted one goal and three assists and Mats Zuccarello scored twice before departing the game after being victimized by a second-period slash to lead host Minnesota over struggling Winnipeg in St. Paul, Minn.

Alex Goligoski, Ryan Hartman, Jon Merrill and Matt Dumba also scored for the Wild, and goaltender Cam Talbot made 30 saves to kick off a five-game homestand.

Pierre-Luc Dubois scored Winnipeg’s lone goal in its most lopsided loss of the season. Starting goalie Connor Hellebuyck was pulled after surrendering four goals on 14 shots. Eric Comrie made 21 saves in relief for the Jets, who have lost five straight games.

Getting a rare start in Anaheim’s net, backup goaltender Anthony Stolarz made 34 saves in a shutout of visiting Ottawa.

Rickard Rakell had a goal and an assist and Trevor Zegras had two assists. Isac Lundestrom, Derek Grant and Troy Terry also scored for Anaheim.

The victory snapped the Ducks’ three-game losing streak. Ottawa’s losing streak was extended to four games, and the Senators are 1-9-1 in the month of November.

Defenseman Roman Josi collected a goal and an assist in his 700th career game, lifting Nashville over visiting New Jersey.

Josi joined David Legwand, Shea Weber and Martin Erat as the fourth player to appear in 700 games for the Predators. Josi commemorated the occasion by posting his fifth multi-point game this season as Nashville improved to 8-0-3 in its past 11 meetings with the Devils.

Gustav Nyquist collected one goal and one assist and Jack Roslovic scored the go-ahead goal in the third period to give host Columbus a victory over slumping Vancouver.

Adam Boqvist and Max Domi also scored for the Blue Jackets, who have won five of six games. Goaltender Elvis Merzlikins made 39 saves in a sparkling performance.

Vasily Podkolzin and Tyler Motte replied for the Canucks, who are on a three-game losing skid and have just one win in nine outings. Goalie Thatcher Demko stopped 17 shots.

William Nylander and Wayne Simmonds each scored in the opening six minutes, and visiting Toronto continued its hot run with a victory over San Jose.

Auston Matthews and John Tavares also scored as the Maple Leafs won for the 13th time in their last 15 games going back to Oct. 27. Toronto also won its sixth consecutive road game.

Maple Leafs goalie Joseph Woll had 34 saves in his third career game as Toronto has won the first three games on a four-game road trip that ends Sunday at Anaheim.