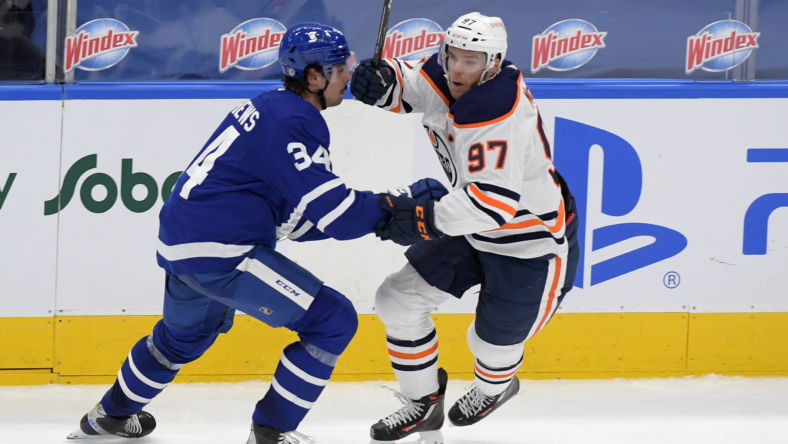 With the new NHL season underway, speculation is already circling some of the league’s most elite players. The conversation around the Hart Memorial Trophy, awarded to the NHL MVP, is starting early.

The Hart Memorial Trophy, handed out at the end of every regular season, is given “to the player adjudged to be the most valuable to his team.” The winner is decided in a vote amongst the Professional Hockey Writers Association in all NHL cities.

NHL MVP race: Who will win the Hart Memorial Trophy?

The latest NHL MVP odds are provided via BetMGM, with analysis provided on each of the top Hart Memorial Trophy candidates during the 2022-’23 NHL season.

The Edmonton Oilers captain is, by all accounts, the best player in the league right now. He’s tallied an insanely impressive 39 points in just 22 games, and plays huge minutes for his club. He can pretty much guarantee at least a point a night (though his pace is nearly two right now), and plays a huge part in every single Oilers win (and even some of their losses). The first quarter of the season, naturally, sees him proving his on-ice magic yet again, despite the Oilers’ early struggles. And, on November 29, an NHL panel of senior writers voted McDavid the early trophy favourite.

Matthews is one of the most gifted goal-scorers in the game. Last season he scored at an incredible pace of nearly a goal a game, but is not enjoying the same success so far this season. As the Maple Leafs seem to finally come out of the slump, Matthews’ performance seems to be directly correlated to their wins and losses. Matthews has a respectable 26 points (thanks to a recent scoring surge), but he is being beaten out by key players in this race at a pretty significant margin. He has only 11 goals and, if he wants to win the MVP race, Matthews needs to find the back of the net. 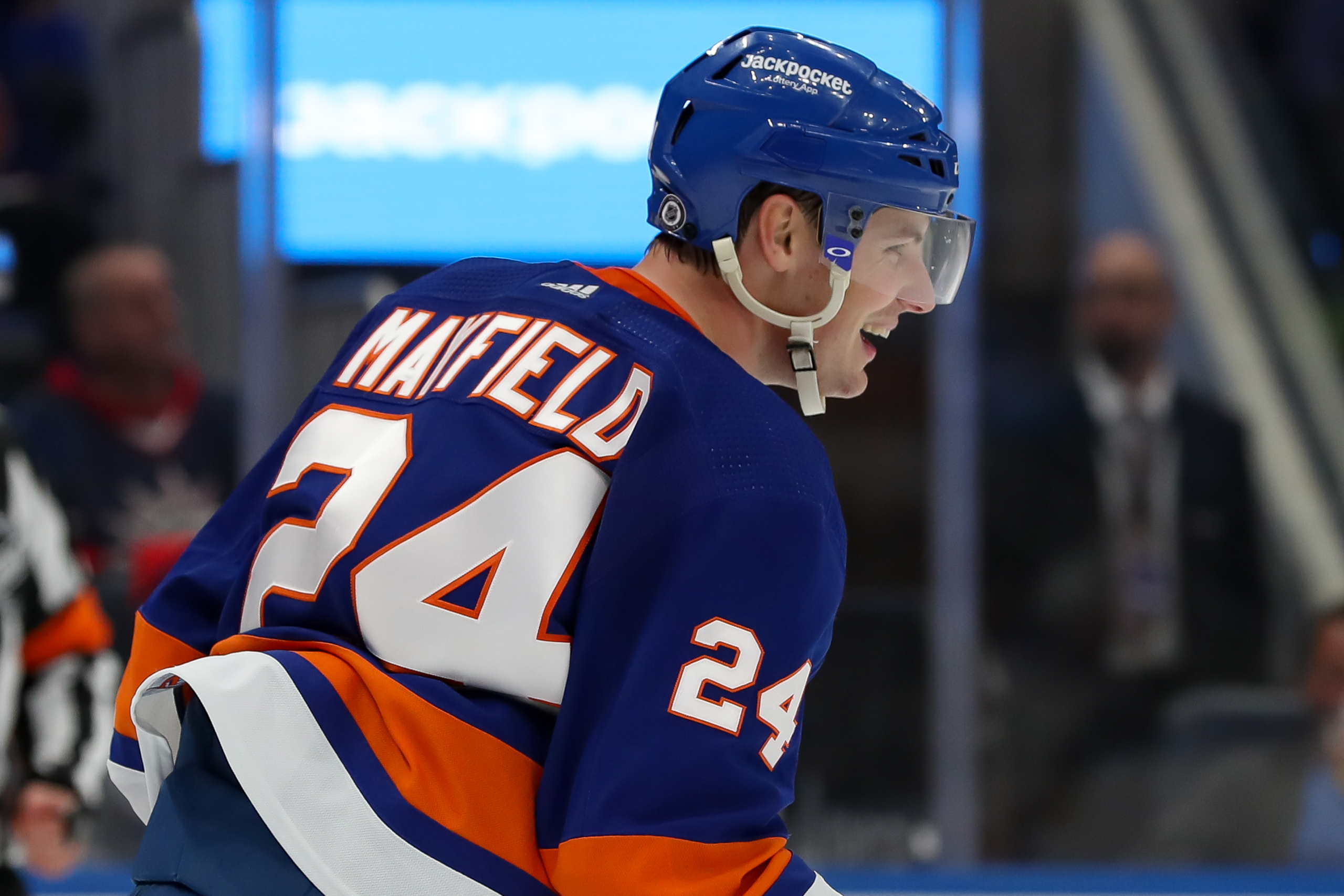 With the first quarter of the season under their belts, the Bruins are flourishing, enjoying one of the top spots in the NHL standings. In 22 games, the Bruins have only lost three matchups, and David Pastrnak is leading the charge with a monster showing thus far. He has 32 games in 22 games, and 15 of those have come on the power play. He adds a +10 plus minus and 109 shots, alongside a 12.8 shot percentage. He missed the first bit of last season with an injury, and Boston seemed to struggle early on. The change is proof enough of Pastrnak’s value.

Fresh off a Stanley Cup victory, the Avalanche forward (who is now the highest-paid player in the league) is faring well without captain and linemate Gabriel Landeskog, who is sidelined until the new year following knee surgery. MacKinnon is among the top in the league in assists with 22, and has a total of 28 points on the season. He plays a well-rounded, balanced game that’s instrumental in the Avalanche’s success, and is arguably playing some of his best two-way hockey, combining his speed and his hockey mind for some brilliant plays. He is not shy about taking the lead and, if he wants to repeat the victory, will need to stay at the top of his game.

Kirill the Thrill is nothing short of impressive and an absolute blast to watch. He demonstrates the same scoring ability that Matthews has, but at a younger age and on a team that certainly rosters less superstars. Minnesota, though, is not showing the same promise they did last season, finally recovering from a disastrous start to the season. Still, Kaprizov is unaffected, with 27 points in 21 games despite the losing efforts. He’s a former Calder Trophy winner, too, which could help his chances, especially if the Wild turn things around as the season progresses.

Even though he’s not on the BetMGM odds list, Karlsson is making a strong case for the Hart Trophy. The 32 year old defenseman has posted 32 points in 25 games, which is especially impressive considering he’s on a struggling team who struggles to find wins and offense. He’s seen a resurgence of sorts, after a few less-than-stellar seasons on the blue line. While he may not be helping his team win, he is garnering tons of trade talk, and could be used as a key bargaining piece in accelerating the Sharks’ rebuild. And, on the right team, he could be the difference maker in securing a playoff spot, or even a Stanley Cup.

Last season, Auston Matthews was awarded the Hart Memorial Trophy, thanks in large part to a high-scoring season that saw him tally 60 goals in 73 games. The award was given to the NHL in 1960, according to the league’s website, “after the original Hart Trophy was retired to the Hockey Hall of Fame. The original trophy was donated to the NHL in 1923 by Dr. David A. Hart, father of Cecil Hart, former manager-coach of the Montreal Canadiens.” 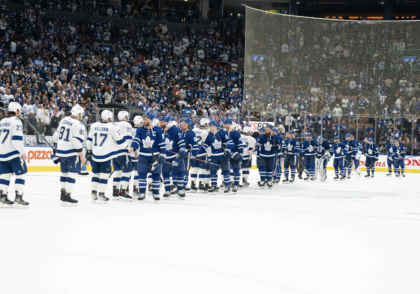 Who is the current NHL MVP?

Historically, it is extremely rare for a player to win the award in back to back years. The last player to achieve that feat was Alexander Ovechkin in 2008 and 2009, so the odds are against Matthews winning for the second year in a row. And, as it stands, Matthews is not enjoying his expected success this season. What’s more, the Maple Leafs have failed to make it out of the first round since Matthews was drafted in 2016, meaning he has done nothing to change the team’s playoff woes (granted, playoffs are not considered for the Hart Memorial Trophy).

Instead, the current favourite is Edmonton Oilers captain Connor McDavid, who is enjoying a strong start to the season despite Edmonton’s struggles. He opened the season with a hat trick, and had two four-point nights in four games. On the season, he has a total of 39 points, and is on pace for another 100+ point season. Stats like those are certainly MVP caliber.

What is the Hart Memorial Trophy awarded for?

As mentioned, the award itself is given to the player judged to be the most valuable to his team. In most cases, that translates into a goal-scoring forward. And, the Hart only takes the regular season into consideration, with a separate award being given to the playoff MVP.

Who has won the most NHL MVPs?

Wayne Gretzky won NHL MVP nine times, including eight consecutive seasons from 1980-87. He won the award as a member of both the Edmonton Oilers and the Los Angeles Kings, and is one of the only players (alongside longtime teammate Mark Messier) to win the award with more than one team.

Can a goalie win the Hart Memorial Trophy?

While a goaltender hasn’t won NHL MVP since Dominik Hasek won it with the Buffalo Sabres in 1997 and 1998, Igor Shesterkin’s show-stopping play since he burst on the scene has kept him in the MVP conversation. If he can continue his incredible performance, he is a solid contender and may win the award in the blue paint for the first time in over 20 years. That said, he has some difficult competition in superstars like Connor McDavid and Leon Draisaitl, as well as Nathan MacKinnon and Cale Makar, who are chasing back-to-back Stanley Cups.