The Boston Bruins and Pittsburgh Penguins met in the National Hockey League’s annual Winter Classic at Fenway Park, where the Bruins improved upon the league’s best record with a 2-1 comeback win.

Despite a lackluster hockey game on the ice rink built upon the infield, fans in attendance participated in a winter festival at the historical ballpark known for special moments in October.

Whether it was a visit from Boston sports legends like Bobby Orr and Jason Varitek or the Boston Pops Orchestra performing Neil Diamond’s Sweet Caroline, the atmosphere overshadowed the game.

Furthermore, many fans will remember all the extracurricular activities more than Jake DeBrusk’s two-goal rally in the third period to steal two points for the hometown team.

At puck drop, it was clear these Stanley Cup contenders were working through some problems and needed this ceremonial win to get back on track.

Unfortunately, the outdoor defeat extended the Penguins’ losing streak to five games. At the same time, the league’s best team, the Boston Bruins, continued to improve on their Atlantic Division lead (62 points) after a tough overtime loss on Saturday afternoon.

Here are three takeaways from this year’s Winter Classic.

During the 2021-22 season, DeBrusk struggled to find a place in the Bruins’ lineup, a pretty successful team who finished the campaign with 107 points but had to settle for a wild-card spot in the playoffs.

Despite scoring 25 goals in 77 games, he fell out of favor with then-Bruins coach Bruce Cassidy and requested a trade. Luckily, management did not move the 26-year-old and instead changed their coach, hiring Jim Montgomery, who employs an offense-first style of play.

After the change, DeBrusk rescinded his request and thus far rewarded his new coach with 14 goals and 28 points through 35 games, including three game-winners. Everyone could see right out of camp that he was playing with renewed confidence, especially in the second game of the year when he netted two goals.

His talents sparked a late rally in the Winter Classic, where the Bruins headed into the final 20 minutes trailing by a goal. The home team could not tie up the contest on a power-play opportunity; however, seconds after it expired, DeBrusk made a veteran move and cut across the crease to bury the game-tying goal.

Then, 10 minutes later, after Taylor Hall failed to score on his shot, DeBrusk fired home a wrist shot with 2:24 left, sending the Boston faithful into a frenzy.

DeBrusk has been with the Bruins for six seasons, and his performance in this year’s Winter Classic cemented his legacy as a Bruin favorite forever. Rest assured, no one within the organization could have imagined such a moment one year ago when the relationship between the player and the coaching staff seemed beyond repair. 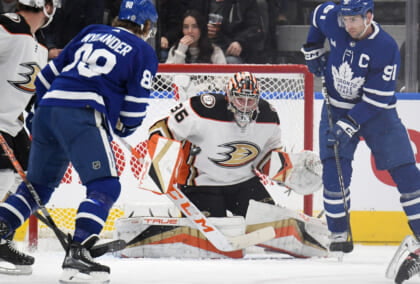 Also Read:
3 trades the Anaheim Ducks should make before the NHL trade deadline

Suppose anyone lived under a rock, avoided social media, or never watched a hockey game. In that case, those people are missing one of the most historical seasons by a goaltender in NHL history. After 25 starts, Ullmark is the front-runner for the Vezina Trophy as the league’s best goalie, and if he doesn’t finish within the top five for the Hart Trophy, league MVP, it would be a crime.

Ullmark’s record is 21-1-1, the only goalie with 20 wins thus far in 2022-23. His microscopic 1.88 goals-against average and .939 save percentage are the best numbers in the league. Furthermore, his current contract pays him $5 million a season, which is a bargain considering how special he’s been backstopping the Bruins to the best record.

The Bruins opened the season on a 14-game win streak at TD Garden, a new NHL record. Even after the calendar flipped to January, the team still has yet to lose in regulation on home ice, making the northeast one of the most feared places to play hockey these days.

In the Winter Classic, the Bruins played sluggish out of the gate, allowing the Penguins to grab an early lead in shots, 14-10, after the first period. Ullmark was sharp, turning away every attempt and keeping his team afloat while they adjusted to the outdoor atmosphere. However, he surrendered a goal halfway through the second period. Nevertheless, he remained solid between the pipes for the rest of the contest turning away a fury of Penguin chances in the dying seconds.

Ullmark’s performance earned him third-star honors, which isn’t bad considering both goal scorers got first and second place. However, no matter what the Bruins do from here on out, their success will hinge on Ullmark’s ability to chase down historical numbers and scribble his name in the record book.

The Pittsburgh Penguins are still searching for consistency

Most fans understand that the end is near for this core group of Penguins legends, Sidney Crosby, Evgeni Malkin, and Kris Letang. Even though Jeff Carter wasn’t around for the Stanley Cup runs last decade, he is also on the back end of his career, which means eventually, a chunk of the Penguins’ offense will retire. This year, most of the roster returned intending to take one last stab at winning a championship together.

Crosby is known to create memorable moments on the grandest stage, like a shootout winner in a snowy Buffalo stadium at the 2008 Winter Classic or scoring the Olympic Golden Goal at the 2010 Olympics in Vancouver. However, this outdoor game marked the sixth time the three-time Stanley Cup winner played in a marquee event. Unfortunately, he seemed almost invisible in 23:51 of ice time. The Penguins captain had two shots on goal and one hit, a relatively quiet night for a guy with 1,452 points.

Letang did not suit up for the game since he returned home to mourn the loss of his father, leaving Malkin as the only other core member to dress. As a veteran player with a Hall of Fame-worthy resume, Malkin finished his day with a minus-1 rating and three shots on goal in 21:51 of ice time. Yes, he did fire the puck into the net after the final buzzer sounded, but by that time, the Bruins had mobbed Ullmark to celebrate a victory, and the sky filled with fireworks.

The Penguins are fighting for their playoff lives in a compacted Metropolitan Division where just five points separate six teams. The Carolina Hurricanes are slowly running away with the division crown, leaving the other Metropolitan teams (New Jersey Devils, Washington Capitals, New York Rangers, New York Islanders, and Penguins) to fight for the remaining spots.

Unfortunately, the Penguins have yet to find a winning recipe, as their current losing streak extends to five games. This stretch is the second longest streak of the season, after a miserable seven-game one in late October and early November. After losing Tristan Jarry to injury in the first period, the team will now face a stiff challenge to earn a win in their next game against the best team in the Western Conference, the Vegas Golden Knights.

Management and players must feel the pressure now since their inconsistencies cost them valuable points, and their 19-12-6 record prevents separation from the pack. Thanks to the deep leadership group in the room, this team can still turn things around and make a deep run in the postseason. However, if the Winter Classic indicates how things are going, the stars are fading, and the wins will be hard to come by as they go further down the stretch if Jarry misses significant time. It is not over by any means, yet it could end sooner than expected.