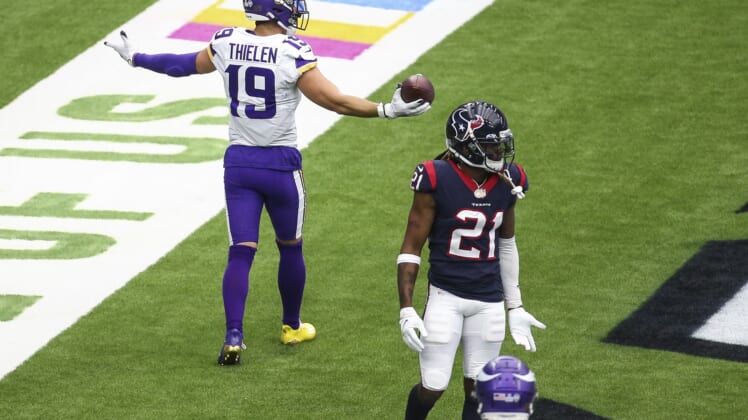 The NFL trade deadline is approaching and rumors are swirling that the Minnesota Vikings might not be done moving stars in blockbuster trades.

After coming into the season with playoff expectations, the Vikings traded prized edge rusher Yannick Ngakoue to the Baltimore Ravens. Now, with Minnesota seemingly destined for a top-10 pick, bigger moves could be coming.

According to CBS Sports’ Jason La Canfora, the Vikings will be shopping multiple veterans at the trade deadline, including safety Harrison Smith, tight end Kyle Rudolph and left tackle Riley Reiff. Notably, some around the league believe Adam Thielen could possibly be moved.

While part of a potential fire sale is tied to the NFL standings, it is also related to Minnesota’s financial situation. Heading into 2021, the NFL salary cap is expected to plummet due to the COVID-19 pandemic. While this will impact every team, it will be especially painful for Minnesota.

The Vikings are already projected to be $8 million over the cap next season with Kirk Cousins’ albatross contract a burden that can’t be moved. As a result, the front office is considering trades that would offload salary and bring in draft capital.

Thielen, a two-time Pro Bowl selection, is thriving this season. He leads the NFL in receiving touchdowns (7) and has hauled in 32 receptions for 415 receiving yards. Playing at a high level, Thielen ranks 12th among wide receivers in average salary ($16.2 million) and his four-year, $64 million extension kicks in next year.

While it’s unlikely Thielen is trading, even with the likes of the New England Patriots and Baltimore Ravens desperate for receiver help, others could move.

Related: J.J. Watt and other stars in need of a change

Smith, who has made the Pro Bowl in five consecutive seasons, would be a fantastic addition for any contender. He still grades as one of the best at his position, per Pro Football Focus. Better yet, his $10.75 million cap hit this season and $10.25 figure in 2021 are reasonable for a team to add.

Rudolph and Reiff would likely generate some interest before the trade deadline and would be the likeliest starters to move. While the return might be limited for the Vikings, acquiring 2021 picks and offloading salary should be the priority.